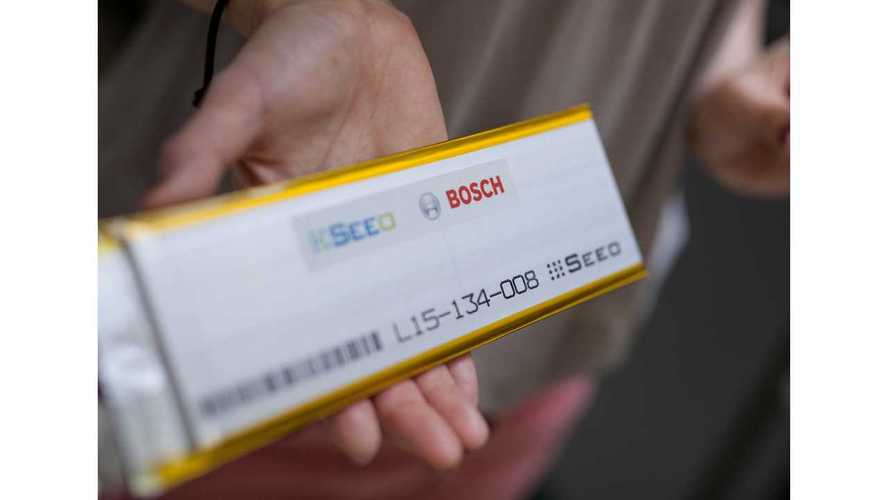 A few weeks after its acquisition of Seeo, Bosch was presenting samples of its solid-state cells at the Frankfurt Motor Show.

Bosch believes that solid-state lithium-ion cells will enable doubling of energy density (no numbers were released), and expect that by 2020, costs will drop by half.

"A comparable electric car that has a driving range today of 150 kilometers would be able to travel more than 300 kilometers without recharging – and at a lower cost."

Production of those new cells are five years from now, according to the press release.

Of course we now after to frame everything in the context of the just released news of $145/kWh cells that LG Chem is currently offering to companies such as GM with the Chevrolet Bolt in late 2016.  We have our doubts that the quote (above) was in reference to anything like the pricing and density of these new 2nd generation batteries.

Dr. Volkmar Denner, the chairman of the board of management of Robert Bosch GmbH said:

“Bosch is using its knowledge and considerable financial resources to achieve a breakthrough for electromobility,”.

“Solid-state cells could be a breakthrough technology. Disruptive start-up technology is meeting the broad systems knowledge and financial resources of a multinational company.”

About the solid-state cells:

The acquisition of Seeo Inc. fits seamlessly into Bosch’s electromobility strategy. Bosch already offers a wide range of components for electromobility, from motors and power electronics to batteries. So far, Bosch has realized 30 production projects related to electromobility. At the same time, engineers are working on further refining the technology, and in doing so, making electromobility a more practical proposition. After all, by 2025, the company forecasts that roughly 15 percent of all new cars built worldwide to have at least a hybrid powertrain. In Europe, more than a third of all new cars will be electrically powered – the majority as plug-in hybrids. To this end, in 2014 Bosch joined GS Yuasa and Mitsubishi Corporation in establishing the joint venture Lithium Energy and Power GmbH & Co. KG, whose objective is to develop a more powerful generation of lithium-ion batteries. Seeo Inc.’s technology complements the work done thus far with Bosch’s Japanese partners. The result will be a combination of groundbreaking start-up technology with Bosch’s systems and technology know-how, GS Yuasa’s cell competence, and Mitsubishi Corporation’s broad industrial base.

For years, automakers and suppliers have been trying to create more powerful batteries. Cells are an important building block – the battery of an electric car consists of numerous interconnected cells. Cells are thus a substantial part of the value-added. The performance of an energy storage device can be improved with various methods. For example, in cell chemistry, the material that the positive and negative poles (cathode and anode) are made of plays a major role. In current lithium-ion batteries, one of the reasons energy capacity is limited is because the anode consists to a large degree of graphite. Using solid-state technology, Bosch can manufacture the anode out of pure lithium, which considerably increases storage capacity. In addition, the new cells function without ionic liquid, which means they are not flammable. “The pure lithium anode represents a huge innovative leap in battery cell construction,” Denner said. Thanks to its acquisition of Seeo Inc., Bosch now possesses the first sample cells which have the potential to meet the high standards of the automotive industry where durability and safety are concerned."