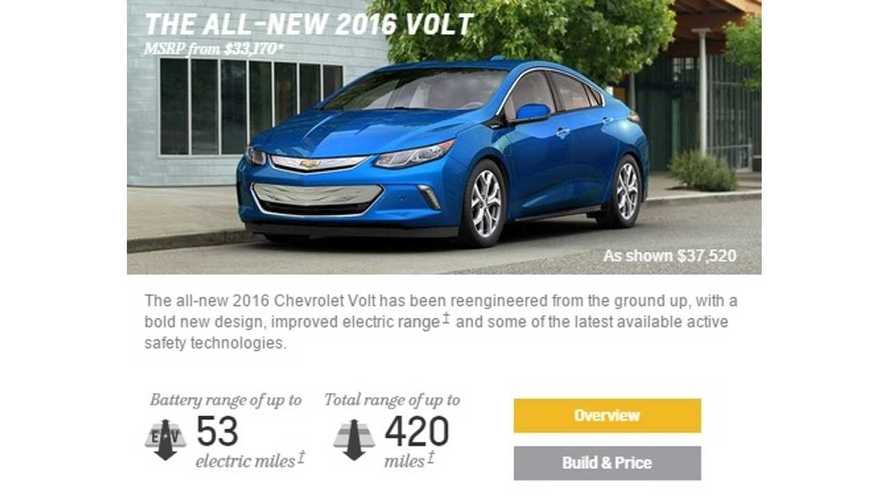 We have known the basics surrounding the all-new, 2nd generation 2016 Chevrolet Volt for some time; such as the starting MSRP at $33,995.  But what about if you want to know the cost of the fancy "Illuminated Charge Port" option that is both functionally useless, but also pretty cool?

Now that GM has put the 2016 Chevrolet Volt configurator online (check it out here), you would know the "green ring of light" will set you back $225.

Editor's Note: The 2016 Chevrolet Volt (and hence the online configurator) is only available in the US in 11 states, before the 2017 Chevrolet Volt is released nationwide in early 2016.  Those states are: California, Oregon, Connecticut, Maine, Massachusetts, Maryland, New York, New Jersey, Rhode Island, Vermont and New Hampshire.

Of course, being the sophisticated outfit we are, we set out to fully deck out the top of the line Premier version (starting from $38,345) for no particular reason, just to see how high one can option out the 2016 Volt - as a point of interest, the answer is $44,605

As to actual first deliveries of the 2016 Chevrolet Volt will occur, we had expected those to have occurred by mid-September, and well, that did not happen.

From what we have been able to piece together, it turns out that 2016 Volts built at GM's Hamtramck, Michigan facility from August through time of press have been sitting in a protracted quality control hold.  And that some early completed California orders that where intended to head west, have now been re-assigned/rebuilt (with new VINs), for unknown reasons.

That being said, we now expect first deliveries (including the rebuilds) to happen in the first week or two of October.