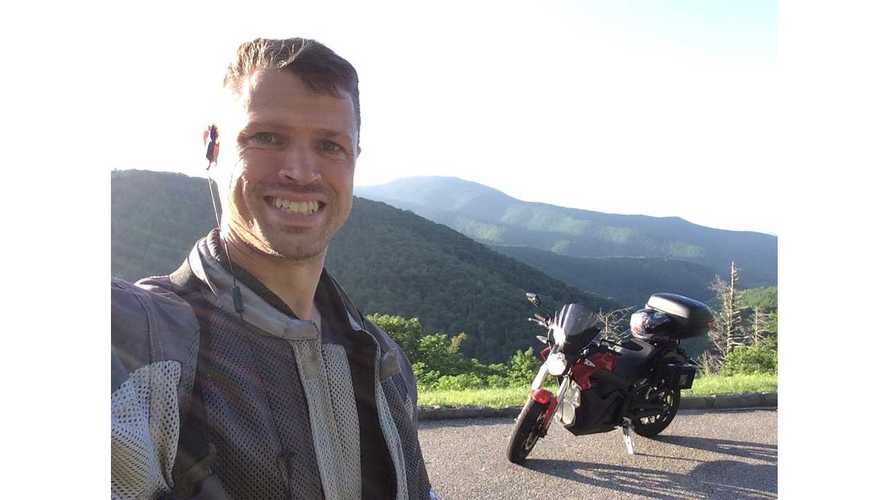 Map of my journey on Tuesday - Click to enlarge

If you haven't driven along the Blue Ridge Parkway, do it! This truly is one of the gems of visual splendor in the U.S. Each section has its own particular character. From Waynesboro, where it begins, to Roanoke the parkway winds through mountainous forest and you have the feeling of being out in nature. There are slightly more roads connecting to the parkway than on Skyline drive, but not many and on the day I rode it I felt like it was my own private road.

Between Roanoke and Boone, NC there are farms and rolling hills. This sections isn't as majestic as the first, but it has its own country charm. From Boon to Asheville you are back in the mountainous forest and you pass the tallest mountains on the east coast including Mt. Mitchell, the tallest.

Everywhere I stop there are bikers eager to check out the electric motorcycle since they have never seen one before. However, our conversations are different from years past in that many people have read about them. So instead of describing an electric motorcycle from the beginning, they already know about Zero.

This section of the ride mirrors what I did last year, but I need to charge half as many times! This allowed me to go to familiar charging spots including Makoto's Japanese Steakhouse in Boone, NC where I got to chat with Ronald, a Tesla Owner. He's a great proponent of EVs and has a high powered Tesla charger in the back of the restaurant as well as a NEMA-14-50 connection that I can use.

Something tells me this "Southern Bell Tel & Tel Co" is actually a speakeasy.

Upon arriving in Asheville I met friends for a delicious bratwurst dinner, then went to a speakeasy to dance to a live band. What a great way to end a long day!

Tonight I stay in Asheville and tomorrow will ride to Cherokee, NC to the end of the Blue Ridge Parkway. Then I'm headed to Charleston, SC to stay with some other swing dancing friends.

Charging at the Fancy Gap KOA