High Power BMW i8 & Spyder Version Both Under Consideration 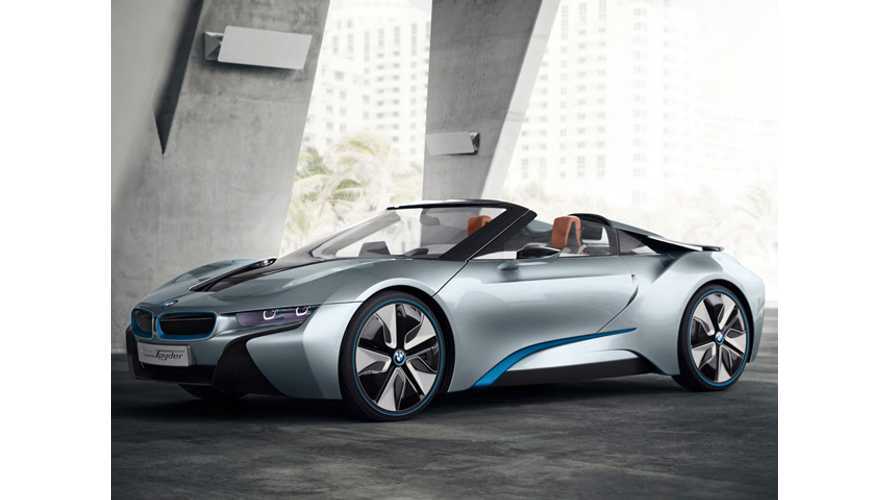 There’s been high demand for a higher performing version of the BMW i8 ever since its inception. Upon driving the i8, many felt that while it was good, the chassis was easily capable of handling more power easily. So calls for an i8s, or something similar, have been circulating the interwebs for quite a long time. It seemed for bit as if BMW wasn’t going to be making any such performance version of the i8. Until recently, that is.

According to Frank Van Meel, head of BMW’s M Division, BMW will be creating a high-performance variant of the i8. Though, this upcoming go-fast i8 will not be developed with any help from BMW’s famous M Division. “That’s because BMW M wasn’t involved in the development of the i8, which is essential for M,” says Van Meel.

The high performance i8 will have a different scope altogether and won’t be some hardcore hybrid supercar. Because, according to Van Meel “The i8 is not developed as being a supercar, but as comfortable sports car, which you can use daily.”

This obviously makes sense, as the M Division’s entire purpose is to create the highest performing vehicles possible and keeping the i8 a comfortable cruiser isn’t something M should be focused on. It also makes sense that BMW would want to keep the i8 a more civilized car, as its customers are not likely ones to favor bone crunching suspension and loud exhausts. Though, the current i8 is no slouch in the performance department and this upcoming one should be even better.

According to a different BMW Senior Official, i8 customers have been asking for more power and some extra sportiness. So it’s possible that track use won’t be out of the question for this high-performance i8. The chassis is already extremely capable for track use, given its incredible lightweight and stiff construction. So it would just need some suspension tuning and more power to be a proper track car. The extra power is said to be coming from a tuned version of the 1.5 liter three-cylinder TwinPower that’s already in the i8, but will be making somewhere around 300 horsepower. Combine that with the electric motors and this new i8 should pack over 400 horsepower.

BMW has also been toying with the idea of a convertible version of the i8, though such a car hasn’t been green-lit yet. We recently discussed why an i8 Spyder would be such an attractive and desirable car, so if BMW in the process of building a faster version, it’s possible a drop-top will be coming as well. If one is made, I’m assuming both the standard and high-performance variants will be available in convertible form.

Given that the i8 is one of BMW’s most exciting and intriguing cars, a more powerful and better handling version is music to gearhead ears. Hopefully BMW follows through and is able to put these into production. If so, cars like the Porsche 911 and Audi R8 better look out.