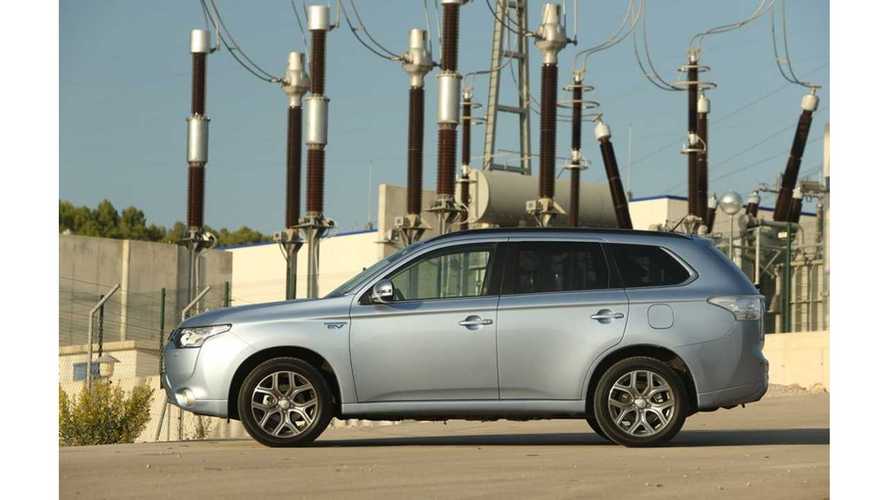 The Japanese plug-in hybrid, through the end of June, noted 12,066 registrations out of 35,241 total. That's more than one third of all plug-ins sold in the UK.

Here are some interesting comments from Steve Gooding, director of the RAC Foundation:

“The march of Mitsubishi continues with the latest data showing the Outlander plug-in hybrid extending its lead over the Nissan Leaf as the most popular ultra-green car in the UK.

“The success of the Outlander looks to be down to three things: a high-profile advertising campaign, good range, and probably most importantly competitive pricing which makes it as affordable to buy as the diesel equivalent.

“But that price is dependent on the government grant. Ultimately all ultra-green cars will have to stack up commercially when the grants are withdrawn. What ministers must ensure is that both consumers and manufacturers have a clear idea of when and how the scheme will come to an end.

“The interesting question is whether Mitsubishi are making money from this model or using it as a loss leader to gain market share and drive out competitors.

“It is worth noting that the growth in the number of ultra-low carbon vehicles on the road slowed significantly in the latest quarter compared with the previous. This is probably due to seasonal variations in car buying volumes but industry and ministers will be keeping a keen eye on the trends to make sure demand isn’t stalling.”

Nissan LEAF is second best with 9,310 total registrations. With the arrival of the new 30 kWh model, LEAF could see a surge in sales too.

BMW i3 and Renault ZOE are fighting for third place this year.

Tesla, at #7, moved 144 Model S in Q2, just behind the clearance sell-off of what was left of the Vauxhall Ampera.

To put these numbers in perspective, in the UK there are 30.9m cars and 3.7m vans. Therefore those vehicles licensed and eligible for the plug-in car and van grants make up 0.1% of the total: roughly 1 in every 1,000."