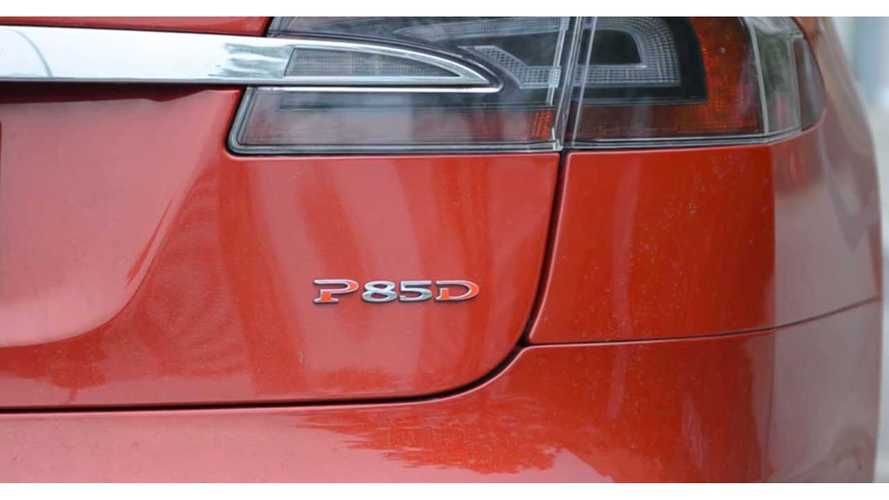 In this post, Straubel attempts to clear up "...some confusion about our methodology for specifying "equivalent" horsepower ratings for our all-wheel drive, dual motor vehicles – the "D" versions of Model S."

Straubel says that his post "will hopefully answer those questions."

Attempting to directly correlate horsepower ratings in petroleum burning vehicles to horsepower in an electric vehicle is a difficult challenge. The physics of an electric vehicle propulsion system are very different from a gasoline one. In an EV, electrochemical reactions in the lithium ion cells create electricity. That electricity flows through power electronics that control the voltage and current, then it flows to electromagnets in the motor that create powerful magnetic fields rotating the shaft to turn the wheels. The power required to rotate this shaft has the most correlation to traditional measures of horsepower. However, the chain actually begins in the electrochemical reactions that happen in the battery pack. Depending on the battery's temperature, state of charge and age, the amount of electricity extracted can vary widely.

There is some confusion about our methodology for specifying "equivalent" horsepower ratings for our all-wheel drive, dual motor vehicles – the "D" versions of Model S. This document will hopefully answer those questions.

Defining electric power in terms of horsepower is not very intuitive. Kilowatts or Megawatts are a much more useful unit. Electricity alone can't generate physical motion the way a horse or a fuel-burning engine does. An electric motor converts electricity into motion. Think of electric power as flowing much like fuel flows from a tank to an engine. Various situations (low state of charge, cold temperatures, etc.) can reduce this flow of electrons below the ultimate capability of the electric motor. In other cases, the potential flow of electricity may exceed the capability of the electric motor (warm battery, short duration accelerations, etc.). Since the battery electric horsepower rating varies it is not a precise number to use for specifying the physical capability of an EV. The motor shaft horsepower, when operating alone, is a more consistent rating. In fact, it is only this (single or combined) motor shaft horsepower rating that is legally required to be posted in the European Union.

When we launched the all-wheel drive P85D, we took the straightforward and consistent approach of specifying the combined capability of the two electric motors, front + back. The torque from the two motors comes together resulting in a huge boost in acceleration, the "g's" you feel in a P85D. This is why Insane Mode is so delightful. The vehicle takes off slightly faster than 1g of acceleration delivering the amazing 3.1 second 0-60 mph (96.6 kph) performance. This acceleration was verified by Motor Trend using a base vehicle and medium weight driver. It should be noted that a larger occupant and additional options that increase weight will reduce the acceleration. Also, the Motor Trend standard excludes the first 28 cm of rollout. Including this rollout adds approximately 0.2 seconds to the acceleration.

One additional note is that, while gasoline cars get worse with altitude, electric cars actually get faster. All cars experience reduced air resistance, but gasoline cars become increasingly oxygen-deprived the higher they go. The Motor Trend test was done at approximately sea level, so the Model S will outperform a combustion car of the same nominal acceleration as altitude increases.

Also, the all wheel drive system in the dual-motor cars distributes available electrical horsepower to maximize torque (and power) in response to road grip conditions and weight transfer in the vehicle. For instance, during hard acceleration, weight transfers to the rear of the vehicle. The front motor must reduce torque and power in order to prevent the front wheels from spinning. That power is fed to the rear motor where it can be used immediately. The opposite happens when braking, when the front motor can accept more regenerative braking torque and power.

Where some confusion occurs is that in the 85D and 70D vehicles the combined motor shaft power is very similar to the battery electrical horsepower under many normal conditions. With the P85D the combined motor shaft power can often exceed the battery electrical horsepower available. The dual motors utilize the battery horsepower in the widest variety of real world conditions. The true measures for any performance EV driver are acceleration times and driving performance of the vehicle.