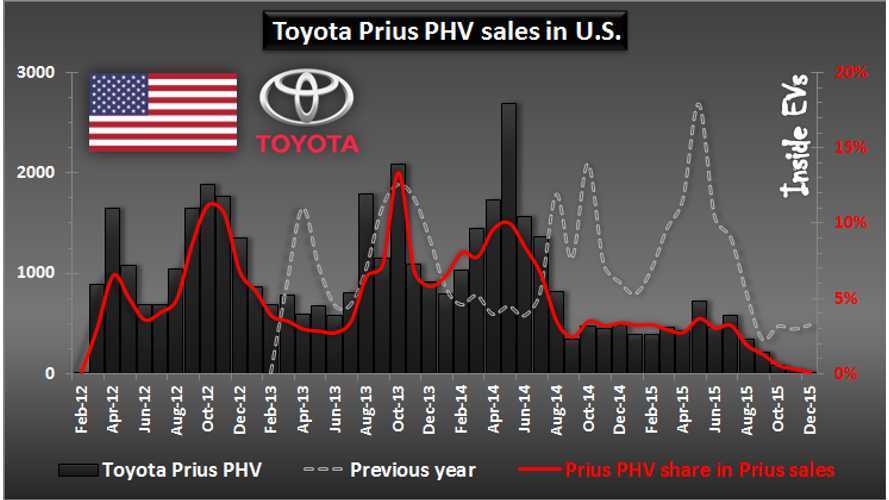 Toyota has "withdrawn" early from the first version of the plug-in hybrid Prius, which has led to a sales flop in 2015.

That was bad news for plug-in market overall in the US, which last year lost some 10,000 expected Prius PHV sales.

The new Prius Plug-In Hybird is to be available in late 2016 or in 2017, so 2016 will bring a Toyota void that certainly the Mirai will not be able to fill.

It's sad that plug-in progress from one of the largest car makers was so heavily slowed down intentionally. In the early years of US plug-in vehicle sales, the Toyota Prius PHV was the 2nd best seller in 2012,  3rd in 2013, but has dropped to 9th for 2015 - next year we estimate a ~25th place finish.  Ouch.

However, all is not lost:

With fuel economy standards and regulatory credits needed that the fuel cell program will not be able to cope with, the new Prius PHV with an estimated ~30-35 miles on the JC08/Japanese standard (which translates to 20-22 miles in real world/EPA ratings), should once again climb high on the sales charts.

Historically, converting standard Prius Hybrid sales to plug-ins has been demonstrated to be a relatively easy thing for dealers to do in the past (provided they have inventory to sell), as indicated by peak sales in May of 2014 when 2,692 were sold in just a month.

2015 sales were just a shadow of previous years: