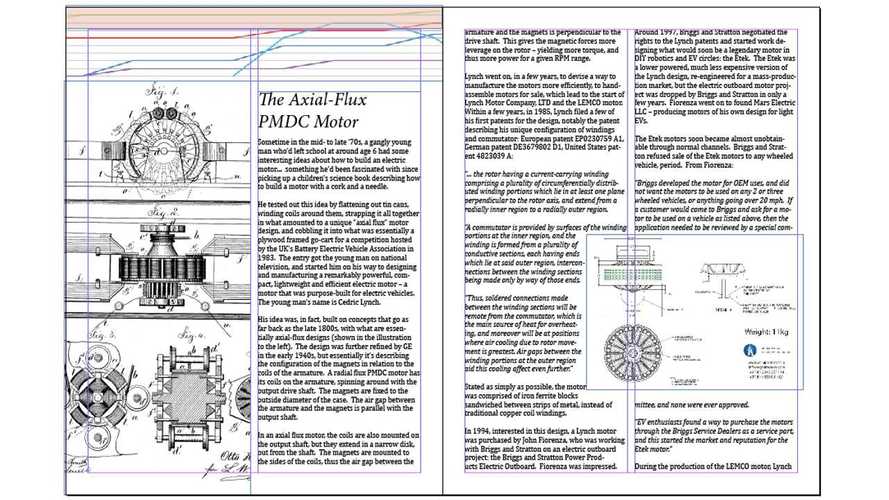 Time for some weekend reading.  In putting together this history book project, I have a few sample chapters, and it seemed like the story of the Axial-Flux PMDC motor was a key touchstone in not only electric motorcycle development, but now influencing the broader EV market.  It all goes back to one man's crazy idea.  Read on...

(excerpted from Power in Flux: The History of Electric Motorcycles)

Sometime in the mid- to late ‘70s, a gangly young man who’d left school at around age 6 had some interesting ideas about how to build an electric motor… something he’d been fascinated with since picking up a children’s science book describing how to build a motor with a cork and a needle.

He tested out this idea by flattening out tin cans, winding coils around them, strapping it all together in what amounted to a unique “axial flux” motor design, and cobbling it into what was essentially a plywood framed go-cart for a competition hosted by the UK’s Battery Electric Vehicle Association in 1983.

The entry got the young man on national television, and started him on his way to designing and manufacturing a remarkably powerful, compact, lightweight and efficient electric motor – a motor that was purpose-built for electric vehicles. The young man’s name is Cedric Lynch.

His idea was, in fact, built on concepts that go as far back as the late 1800s, with what are essentially axial-flux designs. The design was further refined by GE in the early 1940s, but essentially it’s describing the configuration of the magnets in relation to the coils of the armature. A radial flux PMDC motor has its coils on the armature, spinning around with the output drive shaft. The magnets are fixed to the outside diameter of the case. The air gap between the armature and the magnets is a dimension perpendicular to the output shaft.

In an axial flux motor, the coils are also mounted on the output shaft, but they extend in a narrow disk, out from the shaft. The magnets are mounted to the sides of the coils, thus the air gap – the dimension between the armature and the magnets - is parallel to the drive shaft. This gives the magnetic forces more leverage on the rotor yielding more torque, and thus more power for a given RPM range.

Lynch went on, in a few years, to devise a way to manufacture the motors more efficiently, to hand-assemble motors for sale, which lead to the start of Lynch Motor Company, LTD and the LEMCO motor. Within a few years, in 1985, Lynch filed a few of his first patents for the design, notably the patent describing his unique configuration of windings and commutator: European patent EP0230759 A1, German patent DE3679802 D1, United States patent 4823039 A:

“… the rotor having a current-carrying winding comprising a plurality of circumferentially distributed winding portions which lie in at least one plane perpendicular to the rotor axis, and extend from a radially inner region to a radially outer region.

“A commutator is provided by surfaces of the winding portions at the inner region, and the winding is formed from a plurality of conductive sections, each having ends which lie at said outer region, interconnections between the winding sections being made only by way of those ends.

“Thus, soldered connections made between the winding sections will be remote from the commutator, which is the main source of heat for overheating, and moreover will be at positions where air cooling due to rotor movement is greatest. Air gaps between the winding portions at the outer region aid this cooling affect even further.”

Stated as simply as possible, the motor was comprised of iron ferrite blocks sandwiched between strips of metal, instead of traditional copper coil windings.

In 1994, interested in this design, a Lynch motor was purchased by John Fiorenza, who was working for Briggs and Stratton, looking for electric replacements for gas motors in industrial markets, primarily golf carts and floor cleaning machines. Fiorenza was impressed. Around 1997, Briggs and Stratton negotiated the rights to the Lynch patents and started work designing what would soon be a legendary motor in DIY robotics and EV circles: the Etek. (Briggs eventually used the Etek in an electric outboard, but it was only available for a few years form 2004 to 2007.) The Etek was a lower powered, much less expensive version of the Lynch design, re-engineered for a mass-production market, but the electric outboard motor project was dropped by Briggs and Stratton in only a few years. Fiorenza went on to found Mars Electric LLC – producing motors of his own design for light EVs.

The Etek motors soon became almost unobtainable through normal channels. Briggs and Stratton refused sale of the Etek motors to any wheeled vehicle, period. From Fiorenza:

“Briggs developed the motor for OEM uses, and did not want the motors to be used on any 2 or three wheeled vehicles, or anything going over 20 mph.  If a customer would come to Briggs and ask for a motor to be used on a vehicle as listed above, then the application needed to be reviewed by a special committee, and none were ever approved.

“EV enthusiasts found a way to purchase the motors through the Briggs Service Dealers as a service part, and this started the market and reputation for the Etek motor.”

During the production of the LEMCO motor, Lynch had contracted with a German company, Cupex, later known as Perm Motor GmbH, and now operating under Heinzmann GmbH & Co. In what we’ll soon recognize as a pattern of intellectual property practices pretty much industry-wide, Cupex apparently made the decision to design and market their own motor using what they’d learned in working with Lynch, and in the production of the Perm 132 motor reportedly infringed on several of Lynch’s patents. The company continued to manufacture the motor in spite of several challenges. Of the three, the LEMCO (Agni), Etek and Perm132, the original LEMCO/Agni design remains the most powerful for weight and size, and most efficient.

John Fiorenza, as Mars Electric LLC, continued to produce motors designed for use in light electric vehicles but abandoned the proprietary issues of working with the Lynch design. Mars committed to a more typical, and arguably more reliable (yet somewhat less efficient and power-dense) radial-flux design. Though several of the Mars motors were tagged with the Etek moniker, as in the “Etek R” and “Etek RT”, these motors were significantly different than the original axial-flux Briggs and Stratton Etek design, and the use of the term was a violation of Briggs and Stratton trademarks. The R and RT tags came from a few of Mars’ resellers (referring to the ME0708 and ME0709, respectively), ostensibly to paint the motors as replacements for the now discontinued, and fast becoming legendary Etek.

Mars, ultimately renamed Motenergy, went on to work with OEM companies like Zero Motorcycles to help produce some of their earliest PMAC brushless motors – one of their first steps away from the PMDC brushed Agni motors used in their early bikes.

Stories are somewhat vague and vary in who tells them as to what happened in the formation and late ‘90s developments at Lynch Motors, Ltd, but in 2002 Cedric took his design to a partnership with Arvind Rabadia of Agni Motors to product the Agni 95 and 95R (reinforced).

If you were designing and building an electric motorcycle with an interest in getting the best performance in power and efficiency in the period between 2002 and on into 2009, you were looking at the Agni motor or the Lynch design. Zero Motorcycles used Agni in early versions, and Brammo used the Perm 132 in their early Enertia models.

Before this design became available there were no viable commercially produced electric motorcycles, and most garage-built bikes were designed around re-purposed industrial motors – most typically from 48V forklifts and golf-carts. These motors were fully half the weight and bulk of an industrial radial-flux permanent magnet motor, a detail that’s of crucial importance to a power-to-weight, performance sensitive vehicle like a motorcycle. Since the motors could be driven with a standard PMDC controller, well, known and time-proven in industrial applications, applying products from Alltrax, Curtis and Sevcon was an easy jump – even in high-load applications.

Virtually any motorcycle claiming to be a performance electric bike was running Agni motors – as were all the top contenders for the first-year TTXGP Isle of Man races in 2009. Most of them were running two, and the first-year MotoCzysz bike had an astonishing three-motor chain mounted under the battery modules.   The challenges of teaming multiple PMDC axial-flux motors, however, would soon become apparent.

A single Agni 95R is rated at around 16-20kW, depending on the operating conditions and whose specs you believe. To get to the performance of a typical 600cc sport bike, the goal is around 100kW, so it’s simple math and modeling to get to the conclusion that more power is needed. Even with the three motors the MotoCzysz bike proposed, they’re working with only 60kW – remarkable for the day, but far short of anything that would compete with a gasoline-powered race bike.

Unlike other motor types such as series DC, a PMDC brushed motor is very difficult to run reliably in a dual-motor high-load array. Even if the motors are perfectly matched, it’s nearly impossible to drive them without one motor being under-driven leading to the over-loading of the twin. According to Giampiero Testoni of the eCRP (Energica) team: “We used to show up to the races with a pallet of motors – swapping them out as they burned up.” On one particular occastion, even with the help of the master himself – Cedric Lynch – it was nigh-on impossible to keep the motors from burning out when pushed to race tolerances. A well-known builder and racer in the Australian community is fond of referring to the dual-Agni race bikes as “…the twin Indian smoke machines”. The motors typically failed around the brush assemblies, but also, because of the long, narrow armature design, could fail with the armature warping to one side or the other.

It soon became apparent that cooling was required, as well as simply bigger, more powerful motors – both significant design challenges for the LEMCO/Agni layout. PMAC, with no brushes and easily-integrateded liquid cooling systems, as well as higher voltages and higher RPM limits, soon supplanted PMDC brushed motors. However, this didn’t change the advantage of the Lynch design.

The axial flux design remains the lightest, most powerful, most compact electric motor available. YASA, Emrax, and even industry giants like Seimens are all adopting the axial flux configuration primarily for an industry that has even more demanding requirements for power-to-weight: the aircraft industry.  (...to be continued)

Interested?  Intrigued?  Take a look at the Power in Flux: The History of Electric Motorcycles Kickstarter page, and lend your support!