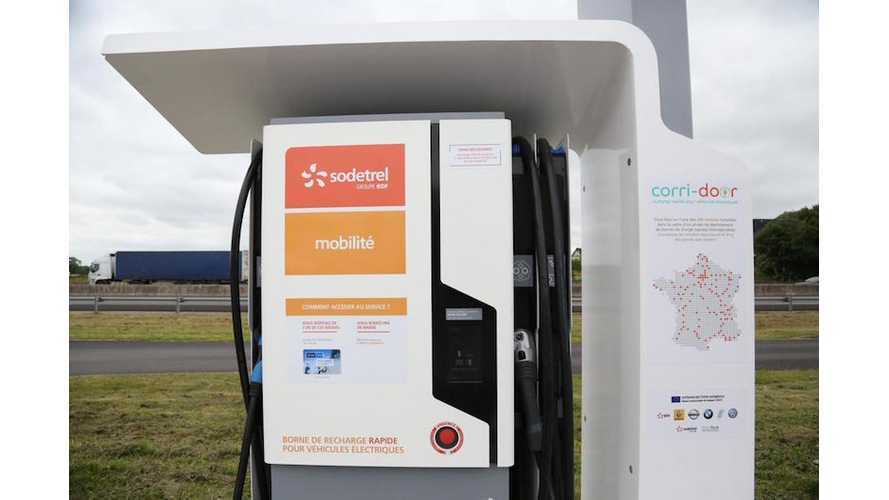 The first two of 200 new fast charging stations were recently launched in France under the Corri-Door project.

Because Corri-Door is 50% co-financed by the European Trans-European Transport Networks (TEN-T) Programme and has engaged several partners like EDF (its subsidiary Sodetrel), Renault, Nissan, BMW, Volkswagen and ParisTech (12 engineering and business schools), all chargers will be multi-standard (CHAdeMO, Combo and AC Type 2) with power probably around 50 kW.

The whole network of 200 points along major motorways or at nearby shopping centers will be ready by the end of this year and, according to the press release, the units will be powered by renewable electricity supplied by EDF.

"They will be located along major motorways operated by the SANEF Group (SANEF, SAPN), one of the original partners, and APRR and Vinci Autoroutes (ASF, COFIROUTE, ESCOTA), as well as in nearby shopping centres. Positioned at 80 km intervals, Corri-Door charging points make inter-urban driving a reality, thereby removing one of the barriers to the development of electric mobility

The aim of the Corri-Door project is to charge vehicles in the time it takes to have a motorway break: cars can be 80% charged in under 30 minutes. In addition, the Corri-Door intelligent charging points are universal and compatible with all commercially available EVs.

Mobility operator Sodetrel plans to launch its own scheme for the Corri-Door charging service. The Sodetrel Pass will be available from its website sodetrel-mobilite.fr, or from service stations that offer the service. Members of other schemes will also be able to use the Corri-Door network to charge their vehicles, since the charging points are interoperable."