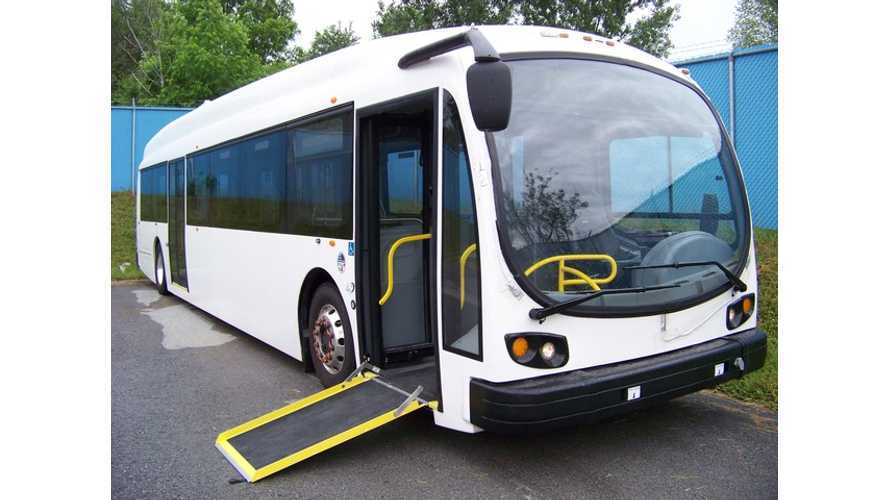 "While conventional diesel buses average 3.86 MPG, the Proterra Catalyst achieved the best efficiency rating ever for a 40' transit bus at 22 MPGe. Nearly six times more efficient than a diesel or CNG bus, the Catalyst is also 15% more energy efficient per mile than the closest competitors' electric bus on the same test, which translates to a lower lifetime energy consumption of 15%. Notably, Proterra's new 40' bus is more energy efficient per mile than most light-duty trucks and SUVs on the road today."

Gradeability. Another record was gradeability at 15.5% grade.

"Gradeability has been a historic obstacle for electric buses, which until now, weighed more and had less power, making steep inclines difficult if not impossible to climb. The Catalyst conquered a 15.5% grade, unprecedented in this test by an electric bus, making it an ideal option to serve metropolitan areas with challenging topography in West Coast cities including San Francisco and Seattle."

"Made of carbon fiber and advanced composite materials, Proterra's unibody design is a prime driver for its high performance with regard to weight and durability. With a curb weight of only 27,370 lbs., the Proterra Catalyst is not only lighter than any other electric bus, leading to greater efficiency, but is also more durable than buses made of aluminum or steel and less prone to corrosion. The transit industry has traditionally struggled with vehicle weight, especially for new technologies like hybrid, CNG and EV. By designing the vehicle from the ground-up, using the most advanced technology and materials, Proterra has eliminated the vehicle weight concern for EV."

"As proof of the vehicle's superior power-to-weight ratio, the Proterra 40' Catalyst also achieved 0-20 acceleration in just 6.7 seconds. Rapid acceleration is particularly critical for keeping routes running on time, allowing bus operators to move in and out of traffic with greater ease."

"To break not one, but four records at Altoona is a major milestone not just for us, but for the industry as a whole and is a testament to how far electric bus technology has come. In an industry hungry for innovation, to receive these kinds of results from rigorous testing organizations such as Altoona helps to assure transit managers and civic leaders that electric buses can outperform fossil fuel vehicles and are a durable and reliable investment."