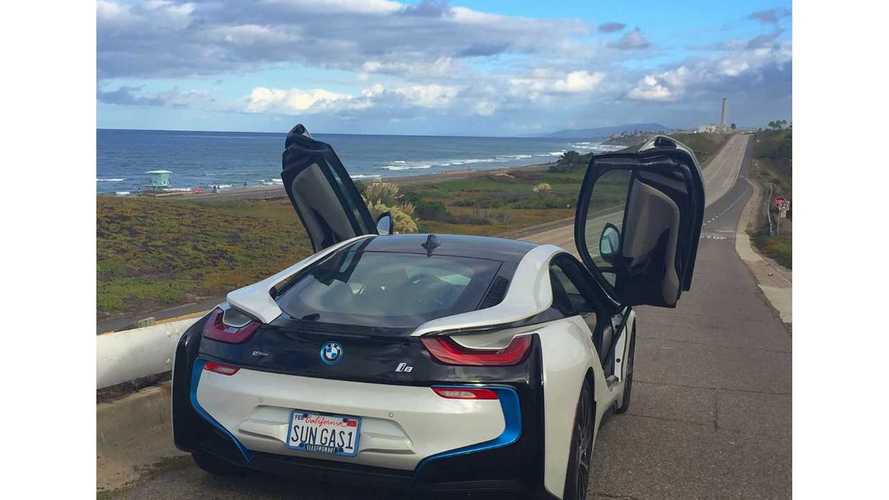 As a long time EV only family, I had to “squint and surrender” my EV only purity ethic a little bit when I indulged my passion for the breathtaking aesthetics, technology and performance of the BMW i8. A truly once in a lifetime car.

Yes, I get 100 MPG driving in my BMW i8 in my normal day to day driving lifestyle.

This past month driving around our semi-urban, suburban home turf of Carlsbad California, our BMW i8 returned a fuel efficiency of somewhere north of 100 mpg. I expect this will be the normal life of our i8 in the years to come with the exception of a long road trip or two annually around America in which we average around 30mpg.

It’s an amazing world when a rocket ship from the future like the BMW i8, can return 3x, 4x, 5x the mpg of its competitive class. Trust me, almost every drive in my i8 involves a moment of two in sport mode. Sometimes as short as 3.6 seconds.

But that’s not why this drivetrain is newsworthy.

It’s newsworthy Because BMW is populating it’s entire lineup with derivatives of this BMW i8 drivetrain. This year, the BMW 3, 5 & 7 series along with the X5 will all be available as Plug In Hybrids using similar drivetrains as the flagship BMW i8. In the coming years, every series and type of car produced by BMW will have a PHEV option.

My experience as a BMW i8 driver, can shed some light on the practicality or lack thereof of BMW’s push to PHEV’s.

If I thought the drivetrain was a joke and the electric bits of the car was just a marketing ploy, I'd be the first to write about it.

EV drivers and EV journalist can be harsh in their response to a PHEV with a 15 -20 electric only range as something less than pure. That's wrongheaded and unfair.

As an EV driver by first choice, my experience with the BMW i8 these past nine months has demonstrated to me the great value of the PHEV architecture. I strongly believe there is a big market segment for plug in hybrids, especially if they share the garage with a full EV.

An EV and a PHEV make for a great garage

Make no mistake I’ll always strongly prefer an EV but having driven both, I see the value and transformational role that PHEV’s will play. There never has been just one type of car that works for all. EV and PHEV’s should play nice in the sandbox together, as they both transition people, some more hesitant and slow to change than others, to electric driving.

Here is what I have learned about 15-20 mile electric range PHEV’s and how this will translate to the wide range of BMW models soon to come.

You must plug in to get the higher MPG. You can use a normal plug
and the supplied 110 volt charger, 220 volt is a luxury for a PHEV.

Cruising around San Diego in a BMW i8, experiencing the performance with a left click to sport mode every now and then, enjoying the driving dynamics of a lightweight carbon fiber 2+2 sports car / touring car and doing all of this plugged into sunshine and at 100 mpg is nothing short of amazing.

PHEV’s and EV’s both have a bright future, the marketplace is split roughly 50% to 50% between the two. Pick the right one for you and begin driving with a plug.

Of course, Chevy Volt drivers have been telling us this for years J

It’s my hope that BMW in addition to PHEV's, keeps pushing the envelop of full EV’s as they have with the BMW i3, the highest efficiency rating of any car sold in the USA.

The future of transportation is not a fork in the road where carmakers choose one path only. It’s a future where there are more options, more types, and more ways to get to where you want to go.

Push the go pedal down hard on both EV’s and PHEV’s.