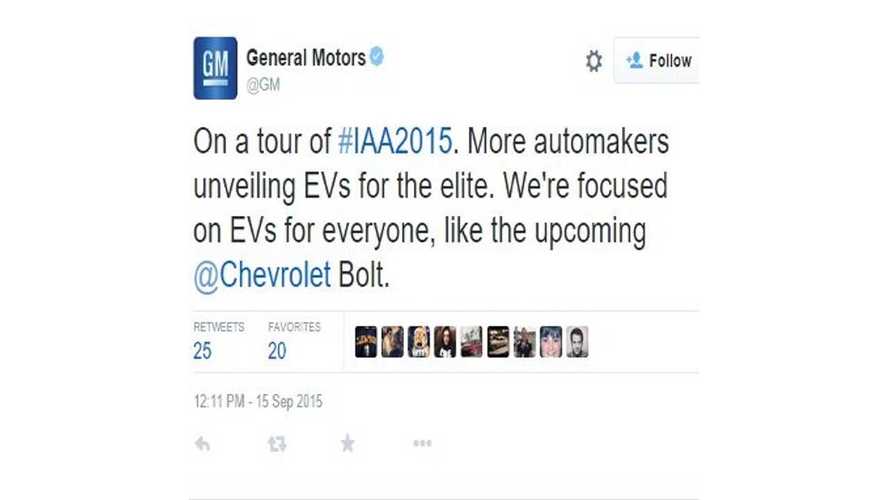 General Motors President Dan Ammann commandeered the company’s Twitter account today as he toured the IAA Motor Show in Frankfurt. Among a handful of benign comments, he dropped this little gem:

“On a tour of #IAA2015. More automakers unveiling EVs for the elite. We’re focused on EVs for everyone, like the upcoming @Chevrolet Bolt.”

The remark was a dig at Audi, who yesterday gave a first look at the mighty compelling e-tron quattro SUV coming to market in 2018, and Porsche, who unveiled a beautiful but optimistically-specced concept electric vehicle, the Mission E. Collectively, they have comprised most of the media attention from the show so far, certainly in the electric vehicle segment.

Audi Gets Serious About All-Electric Vehicles In Germany!

*Editor's note: This post also appears on Chelsea's blog.  Check it out by clicking here.

But GM’s foray into these snark-infested waters started with January’s unveiling of the Chevrolet Bolt, with previous comments aimed primarily at Tesla- ironically when Tesla itself is finally throwing fewer stones and instead imploring more companies to join the EV party.

I like a little competitive feistiness among manufacturers. And I’m especially rooting for more high-volume, affordable, nationwide EV programs. So I was thrilled to see GM steal the show in Detroit, so to speak, with the Bolt and second-generation Volt.

But the particular streak of arrogance revealed by such remarks against other companies making plug-in cars aimed at their own markets is not only a dicey strategy, but tone-deaf.

Not only because GM’s own premium brand, Cadillac, produces a plug-in vehicle that is certainly not “for everyone”. Nor because Dan Ammann himself just purchased one of the highest-priced houses in Detroit’s history. Or that GM has had its own challenges with its plug-in programs, and has hardly earned the right—yet—to claim the moral high ground on fully electric vehicles.

“EVs for everyone” requires diversity. Choices. Vehicle variations in all the ways we’re used to seeing them. No single car—gas or electric— is “for everyone”. And especially at this still nascent stage, more automakers invested in EVs “for real” means a higher likelihood that they become here to stay this time. Crucially, this is not yet a foregone conclusion, and no single company can change that alone.

At the same time, GM raises its own stakes with every remark. The loftier GM’s claims and the deeper its digs, the more the company will have to live up to via the Bolt. It will have no choice but to market it brilliantly and consistently, to engage with the community and stakeholders to leverage all of the support it can possibly earn. Because GM, of all companies, must make a success of its first major foray back into EVs. Any failure of the Bolt will be seen as self-inflicted, a deja vu moment.

So Dan, you keep on talking all you want. I’m all ears.

Editor’s Note: Our thanks to Chelsea Sexton for sharing this story with our readers.  We encourage readers to also check out Chelsea’s blog here.