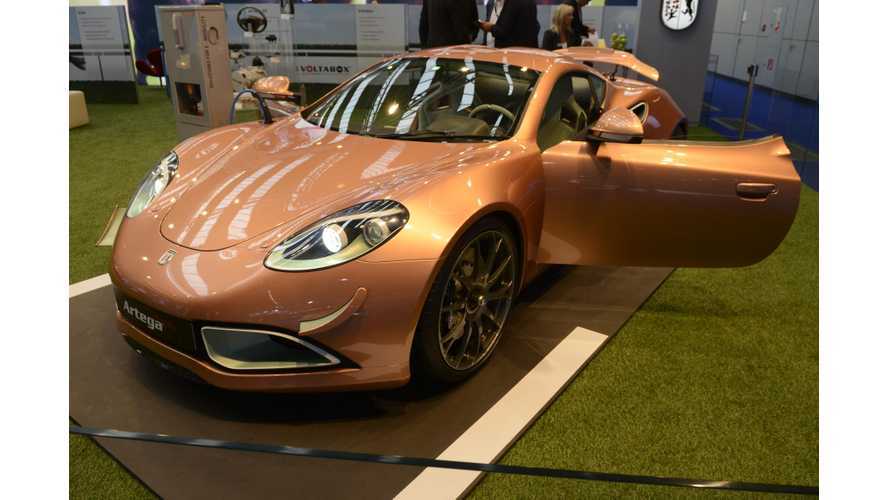 German company Artega unveiled at the Franfurt Motor Show its 250-mile (400 km) electric roadster - the Scalo. The vehicle was developed in cooperation with paragon AG and its subsidiary Voltabox, who recently opened battery facility in Texas.

Artega hopes to attract consumers with its very high level of performance, and will launch small-scale production of 12 units, available for some €170,000 (over $190,000), according to some reports.

We are quite confident that 250 miles at 37 kWh is more PR than real-world result, although still this car could be interesting for someone seeking a more unique, sporty EV.

Artega offers an option to increase the efficiency of the motors from 95% to 98% (at 6,900 rpm) and separately power electronics from 93% to 98.8% by using special silicon carbide transistors. This high-tech package appears in the offer just as an demonstration of technology.

The other thing is use of high-performance capacitors (SuperCaps) to eliminate current surge from the battery during acceleration or recuperation, which is by the way adjustable by the driver by switching paddles on the steering wheel.

One of the largest difference from the Tesla Roadster is charging capability - 64 kW DC in less than one hour or two hours using common 22 kW charging points in Germany. Slow 10 hour charging at 16A is possible as well.

The time is ready for an Artega sports car with a purely electric drive. The new German electric sports car Artega Scalo entices as a direct successor of the Artega GT by visual refinement and many technical world novelties. It is built in a small series of twelve exclusive vehicles to order.

The idea of developing an Artega as an electric sports car is as old as the brand's history. Consistent light-weight construction and the modular construction of the chassis make the Artega platform perfect for electric drives. Three prototypes have been built by 2012, but not made it for serial production due to their design.

The purely electric Artega Scalo founds a new tradition. In future, the vehicles of the Artega brand will bear the names of famous racing stallions. Scalo is the first – he was a very special Westphalian stallion, Galloper of the Year in 2010 and trained very near the head office of Artega.

The Artega Scalo has two Voltabox rear-mount high-performance electric motors with a total output of 300 kW (peak output 390 kW) and a 575 ft-lb. It thus outdoes the performance data of its predecessor. The Artega Scalo accelerates from 0 to 60 mph in 3.6 seconds and reaches an electronically limitedmaximumspeed of 155mph.

The two electric motors use the latest technologies right from aerospace and drive the rear axle via a single-stage central gear. Targeted torque vectoring ensures maximum longitudinal and cross-dynamics with the demand-oriented distribution across the drive wheels. The motor mass is only 66 lbs each, which leads to an outstanding performance density of 2.3 kW/lb. The maximum motor speed is at 12,500 rpm, the maximum efficiency at 6,900 rpm is up to 95%. On request, a version with an outstanding efficiency of 98% is available.

The Voltabox high-efficiency machines are supplied and controlled via two newly developed inverters with an efficiency of up to 93%. A version with special silicon carbide transistors even achieves amaximumelectrical energy conversion of 98.8%.

The energy storage also offers a global novelty. For the first time, the Artega Scalo offers a hybrid system of state-of-the-art battery modules with actively thermally controlled li-ion cells on nickel-manganese-cobalt basis, combined with perfectly customized high-performance capacitors (SuperCaps). For recuperation, the SuperCaps recharge quickly at first; at acceleration, the capacitors will discharge first. This constellation increases acceleration and extends the range. The recuperations system can be adjusted four-fold by the driver by switching paddles at the steering wheel.

The li-ion models are distributed between two systems that are crash-protectedly integrated into the vehicle structure. The capacitors placed in the centre of gravity also ensure best weight distribution. The Voltabox thermal and battery management is fully integrated and functionally intrinsically safe according to DIN/ISO 26262.

The installed battery capacity is in excess of 37 kWh, the nominal voltage is at 411 Volt. For up to 10 seconds, as much as 385 kW electrical output can be demanded. The Artega Scalo has a range of up to 250mls.At a charge status below25%, the power output is limited to 125mph atmost for the sake of a better remaining range, however.

The battery set has its own cooling circuit. The power electronics and the two electric motors have a second shared cooler. This way, all system components work at their respective best working points.

With a 64 kW DC quick charge, it is possible to charge the battery completely in less than one hour. The maximum charge output of the Voltabox on-board charger at the three-phase current connection is 22 kW, which corresponds to a charging duration of approx. two hours. At the AC grid with a 16 A household socket, it takes approx. ten hours.

The new German electric sports car has a storage volume of 8.8 cft that are distributed among the front trunk and the space behind the seats. The empty weight of this vehicle, including batteries is at 3,494 lbs.

Here is a previous electric Artega prototype from a few years ago: