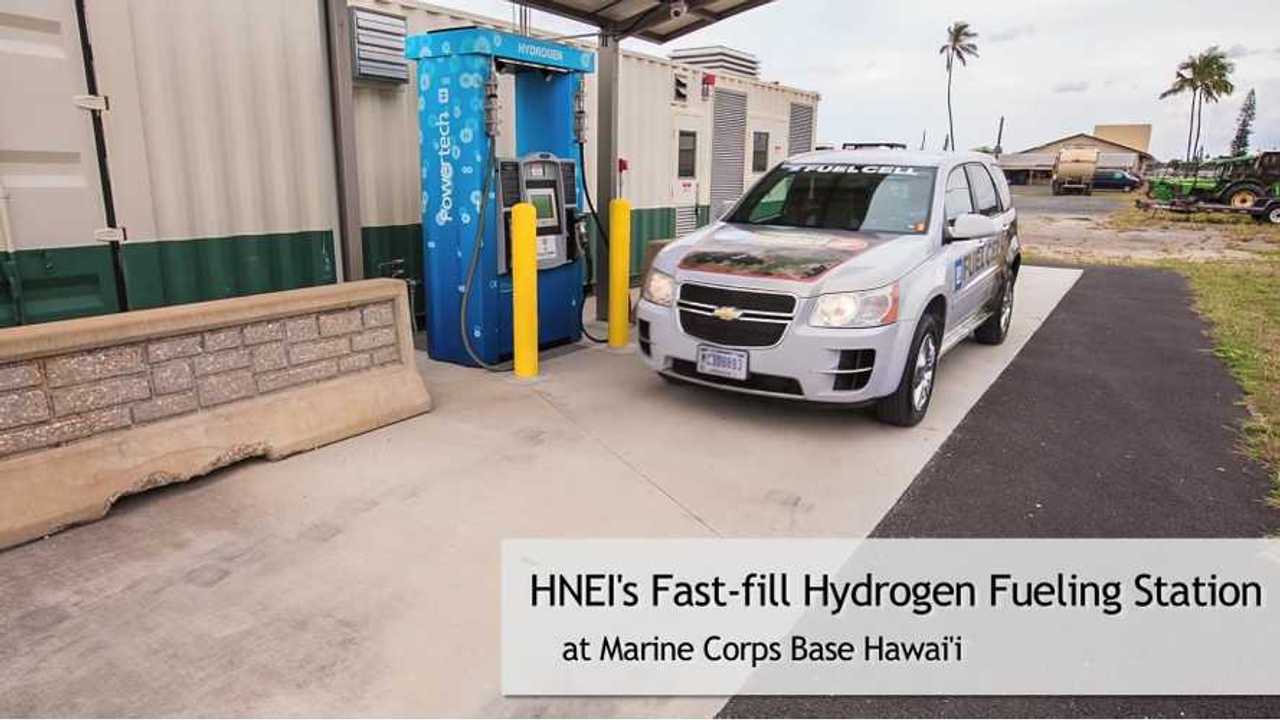 Hawai has its first self-fill hydrogen refueling station with both 350 and 700 bar pressure.

It was launched by the the Hawai‘i Natural Energy Institute (HNEI) at the Marine Corps Base Hawai‘i (MCBH), Kaneohe Bay in November 2014, and was recently certified for unattended operation.

Base purpose of the station is to serve a fleet of General Motors Equinox Fuel Cell Electric Vehicles (FCEV) leased by the Office of Naval Research for use by Marine Corps and Navy personnel on O‘ahu.

This is not a commercial station and the press release doesn't include any information on price of use or whether it's available for future Hyundai Tucson ix35 or Toyota Mirai owners.

"A major challenge for hydrogen production and dispensing stations is the cost of hydrogen at the nozzle. In this project, HNEI is conducting research to assess the technical performance and economic value of an electrolyzer-based hydrogen production system in a 350/700 bar Fast-Fill (under 5 minutes) fueling station. The technical analysis will include component efficiencies under various operating scenarios and the long-term durability of major components. The economic analysis will determine the daily operating cost of the station and the overall cost benefits of producing hydrogen. The dual fill pressure capability will allow this station to service both light duty vehicles that have largely been designed to use high pressure (700 bar) hydrogen storage and larger fleet vehicles such as buses which usually are designed for lower pressure (350 bar).

The MCBH Fast-Fill hydrogen station is part of the Hawai‘i Hydrogen Power Park project established by HNEI to support the US DOE’s Technology Validation Program.  The initial funding from the US DOE Fuel Cell Technology Office was used to procure the electrolyzer and a low-pressure fueling capability.  Additional funding was received from the Office of Naval Research to expand the capability to include the 700 bar Fast Fill to support the Equinox FCEV demonstration at MCBH on O‘ahu. The State of Hawai‘i also provided funding that was used for project management and the installation of equipment."

“We have been really impressed with the fill speed and control algorithms of the hydrogen station at MCBH. It is exciting to experience consistent 4-minute 700 bar fills. I am confident the Department of Defense (DoD) drivers of the FCEVs will be delighted as well. The algorithms to control flow have done a really good job of ensuring tank temperature thresholds are maintained without stopping fills before completion. On top of all that, the station and site aesthetic came out really well.”

“We are excited that the MCBH hydrogen station is now servicing Fast Fills by the drivers without an attendant – a first in Hawai‘i. We are also pleased that General Motors is satisfied with the performance of the station. We hope that our research efforts will help accelerate the deployment of hydrogen stations throughout Hawai‘i as it contributes to the DoD's energy goals.”