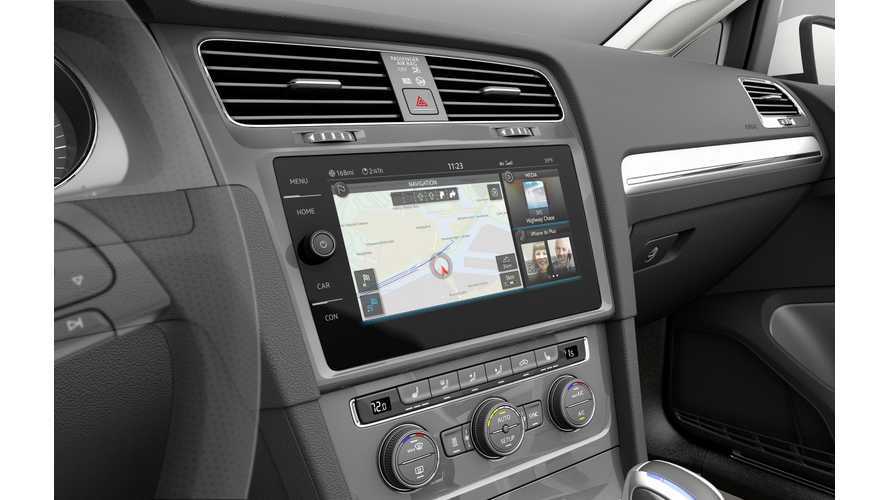 Volkswagen unveiled the e-Golf Touch with a new infotainment system and gesture control as well as voice recognition at 2016 CES, .

There is now a high-resolution 9.2-inch touchscreen with configurable home screen, and some button bar appearing as your hand approaches.

A trick feature is wireless charging for smartphones:

"In the context of electric cars, we typically think of inductive charging as related to the car’s battery. But in the case of the e-Golf Touch, this process refers to smartphones and similar devices, as Volkswagen has integrated an inductive charging system into the mobile phone tray, under the infotainment system. For the first time on a Volkswagen model, it is also possible to wirelessly charge smartphones in the back seats, via the rear armrests. The e-Golf Touch is equipped with a new USB Type C port, permitting high-speed USB data transfer while simultaneously charging the phone. This feature drastically reduces the time it takes to recharge."

Volkswagen hints that we should see a similar system in production e-Golfs perhaps by this time next year.

There's was a slight suggestion from VW on the stage at CES that we'll see range improved a bit on the e-Golf as it enters the 2017 Model Year.

Most of the Touch features are presented in the videos below:

Volkswagen will offer one of the world’s first compact cars with gesture control functionality; new infotainment system has a configurable 9.2-inch home screen

Las Vegas, January 2016 — Volkswagen returns to CES 2016 with two ground-breaking, zero-emissions vehicles: the BUDD-e concept and the e-Golf Touch. BUDD-e is a concept vehicle that will take CES attendees on a quick time-hop to the year 2019. In contrast, the e-Golf Touch, with its next-generation infotainment system, shows that technologies showcased at CES 2015 are close to production.

Additionally, Volkswagen will introduce numerous electronic innovations at CES 2016, to debut in the very near future. These developments illustrate how cars are currently undergoing immense transformations via electronics. New innovations control drive functions, allow driver assistance features to react faster, and increase connectivity by bringing the Internet into the car. Other technologies will transform instruments, displays and controls allowing for a new level of functionality.

Interactive Human Machine Interface (HMI) functions make new communication channels between humans and cars possible—and natural. Devices such as smartphones, tablets, smart watches and cameras have become omnipresent in our everyday lives, and are being integrated into the car in new ways. This fusion is accelerated by more powerful computers and increasingly intelligent software, resulting in evolutionary leaps that are destined to transform the automobile.

The Golf R Touch concept car that was shown at CES 2015 was the first production-based Volkswagen to feature a gesture control system. With the introduction of the e-Golf Touch, Volkswagen presents a more advanced generation of the Modular Infotainment Toolkit (MIB) and for the first time, an early series-production preview of this new intuitive control technology. The e-Golf Touch features the latest version of MIB with a 9.2-inch high-resolution display (1280 x 640 pixels). All functions and displays are embedded in a sophisticated, clear glass surface.

Facing the driver are four touch-sensitive buttons (Menu, Home, Car, App) and a push-rotary switch. The system’s 8.2-inch wide and 4.1-inch high home screen consists of a large main area as well as two configurable tiles on the right of the home screen. Each tile area, sized 1.7 inches high and 2.4 inches wide, can be assigned any of ten different functions. They can include Media (including cover art) or phone (including photo caller ID). It is also possible to drag the main area out to fill the entire home screen, displaying the full navigation map or smartphone integration platforms such as MirrorLink™, Android Auto™ or Apple CarPlay®, through Volkswagen’s Car-Net® App-Connect interface.

The e-Golf Touch also marks the debut of Volkswagen’s latest generation voice control technology. This system offers significantly improved controls, as voice commands are displayed on the screen to accompany the request. This new version of the voice control system will be launched in the early summer of 2016 in Europe.

Volkswagen will also be the first manufacturer to present a new “Keyword Activation” voice recognition function in the e-Golf Touch. This feature allows the driver to start voice recognition simply by saying “Hello Volkswagen”, or similar, to the system. This eliminates the need for physical activation.

In the context of electric cars, we typically think of inductive charging as related to the car’s battery. But in the case of the e-Golf Touch, this process refers to smartphones and similar devices, as Volkswagen has integrated an inductive charging system into the mobile phone tray, under the infotainment system. For the first time on a Volkswagen model, it is also possible to wirelessly charge smartphones in the back seats, via the rear armrests. The e-Golf Touch is equipped with a new USB Type C port, permitting high-speed USB data transfer while simultaneously charging the phone. This feature drastically reduces the time it takes to recharge.

The range of functionality for the Exit Screen will increase considerably with this new infotainment system. For the first time, the exit screen will offer personalized, simplified access (one touch) to functions relevant to the real world, in real time. This makes it possible, for example, to program the auxiliary heating system within a matter of seconds, as the infotainment system displays the predefined settings for a predetermined length of time. Volkswagen will offer the Exit screen functionality in all future generations of vehicles. An individually configurable entry screen is also currently under development.

Personalization 2.0: The number of convenience and assistance systems and the associated range of configurability increases with every new vehicle generation. Many of these systems are individually adjusted, and used by different drivers of the same car. Invariably, this means that settings have to be constantly reset. Volkswagen conceived Personalization 2.0 to solve this challenge. This allows individual settings for one driver to be saved in a user account, then saved to the cloud via Volkswagen Car-Net ID.

If that driver then gets into another compatible Volkswagen, they can simply load his or her Car-Net ID settings in the infotainment system, activating them in the new vehicle. This effectively means that drivers will always have their own individual settings with them, which is especially handy for use in rentals, company cars, or even within families. Using the Volkswagen Car-Net ID app also makes it possible to change your settings in your user account and save the updates to the cloud. The app can be used to familiarize users with a new Volkswagen in advance. All user data is protected against unauthorized access by utilizing advanced third-party encryption and can be deleted quickly by accessing the app.

Media Control, Generation 3.0: Volkswagen Media Control is the rear-seat entertainment system of the future. The app allows control of almost all infotainment functions through a tablet device. Simply connect a tablet via the vehicle’s WiFi hotspot, and passengers are able to control various features such as the radio, all media sources (USB, CD, DVD, hard drive, online song search) and factory-installed navigation. This third generation of Media Control will launch this summer in Europe, and adds several additional features, including:

Car-Net® App Connect and WiFi: Volkswagen Car-Net® App Connect is the brand’s advanced smartphone integration platform that allows for seamless integration from your device to the vehicle. When linked to the infotainment system, the Telephone app can be used—via the system’s touchscreen—with a graphic interface that mirrors that of the smartphone being used. Similarly, the voice control which is available on several smartphone operating systems, map or music apps can also be used in the same manner. Through Car-Net® App Connect and the MirrorLink™, Android Auto™ and Apple CarPlay® integrated platforms, the system is compatible with most available smartphones currently available. Previously it was necessary to connect the smartphone to the infotainment system via a cable. With Volkswagen’s introduction of the second-generation of Car-Net® App-Connect & WiFi, users can take advantage of wireless smartphone integration.  Once the function has been configured, the smartphone can be left in the user’s handbag or jacket pocket. On longer journeys it is, of course, advisable to put the smartphone in the Volkswagen’s wireless inductive charging cradle to supply it with constant power.

The focus of feature add-ons for Volkswagen includes the service aspect. The new Service assistant can recommend switching to winter tires after experiencing persistently low temperatures. The Charging assistant for electric cars shows charging stations within range and indicates how long it will take to charge. The Accident Note app helps to record all necessary information in case the worst should happen. Parking Position displays where the car is parked on its owner’s smartphone and can display walking directions through Google Street View. The Route Info app suggests charging stations that are along a planned route, and provides information on the applicable road traffic rules when you cross a national border. The Calendar assistant can be used to manage the availability of a shared company car online with your colleagues.

Smartphone Notifications: Volkswagen has come up with a solution that allows drivers to stay informed, legally and without being distracted, through smartphone notifications. If the driver wants to know more, the notification can be read out fully. At speeds below 3 mph the whole notification is displayed. Above 4 mph this function is deactivated for safety reasons, in which case only the headlines or the first few words of the message are displayed.

Step 1: The driver can reply to Facebook and Twitter updates displayed as pop-up messages, using a reply option. Reply options correspond to common social network interactions, such as retweeting. In the near future, it will also be possible to reply via voice command. While stationary, it is possible to enter free text using a keyboard.

Step 2: In the second stage of the extension, the car will be given its own identity, as well as a Twitter account. The car can then post messages itself, though the driver will still be required to approve them. If the vehicle’s speed falls below 12 mph for a predetermined length of time, the car could, for example, tweet “Wow, traffic is bad! Sorry guys, I’m going to be late. I’m at a crawl.” If the temperature falls below freezing and the car’s stability control system is active, the message could be: “Hey guys, drive carefully. It’s freezing here and getting slippery! #Thanks, ESC.” This allows friends and family who “follow” the car to stay informed about the state of the vehicle and the surrounding road conditions.