Despite A Slower May, France Plug-In Electric Car Sales Continues To Grow 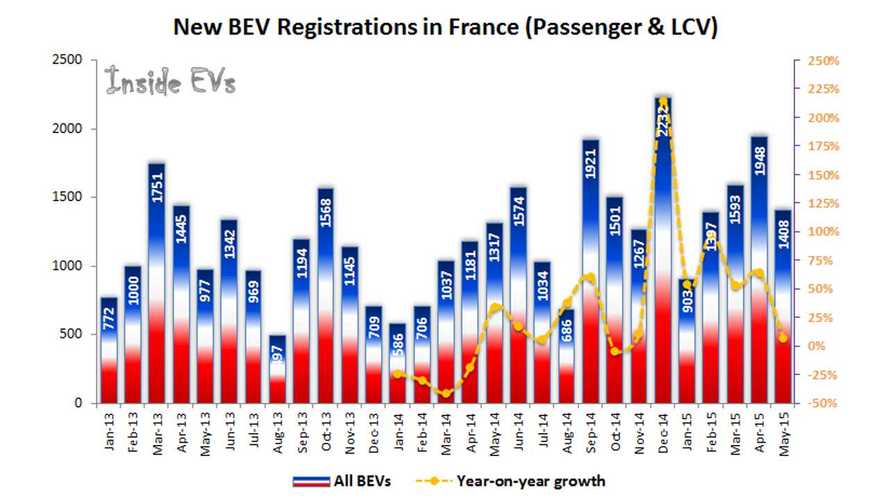 The overall French car market fell down by 4% year-over-year in May 2015, though sales of all-electric cars managed to grow for the seventh consecutive month.

Last month, the total number of registrations for pure electric cars stood at 1,408 (up 7%) - 1,067 passenger cars and 341 light commercial vehicles.

After five months of this year, 7,277 new all-electric cars were registered at an average market share of 0.7% (passenger cars) and 1.1% (LCVs).

As always, Renault ZOE was the best selling EV with 656 registrations (plus 11 registered as LCVs). How important is the ZOE on the French market? You can see here:

Meanwhile, Nissan LEAF second best at 135, and Renault Kangoo Z.E. was first among LCVs (184). A pleasant surprise was the Tesla Model S, which entered podium with 50 new registrations.

BMW i3 in theory had 71, but we believe that 52 of them are with range-extender, not included in the total 1,067 number for pure electrics.

BEV Registrations in France in May 2015 (source: Avere-France / AAA data)

Plug-in hybrids registrations in May stands at 428:

PHEV Registrations in France in May 2015 (source: Avere-France / AAA data)