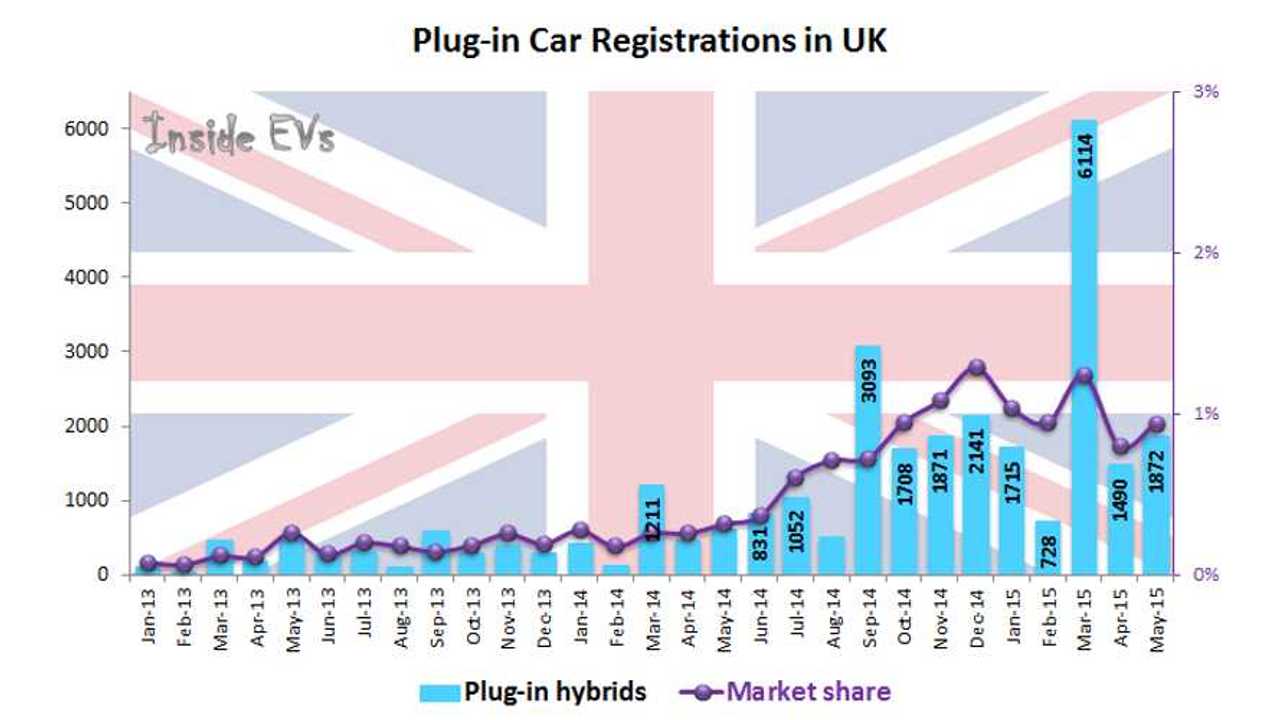 "11,842 ULEVs were registered between January and May – a four-fold rise on the 2,838 registrations in the same period last year. The growth is further evidence of UK car buyers’ increasing awareness of the significant benefits of driving a ULEV, as they look to reduce their running costs and environmental impact. Motorists can now choose from a diverse range of around 20 ULEVs, compared to just six in 2011."

“The remarkable growth in demand for plug in vehicles is expected to continue as the range of ultra-low emission vehicles on sale increases. Meanwhile, we anticipate a natural levelling out of the overall new car market throughout the remainder of 2015.”

The main force of growth in UK is now plug-in hybrids:

Mitsubishi Outlander PHEV is doing especiall well and according to the Japanese company sees dramatic success. So far this year, more than half of the 11,842 plug-in hybrids sold in the UK were Outlander PHEVs.

"The company is seeing significantly better sales across the entire range of models, resulting from higher levels of marketing investment, a growing dealer network and the impact of the dramatic success of its Outlander plug-in hybrid electric vehicle (PHEV).

The Outlander PHEV became the UK’s favourite plug-in vehicle in March this year, when it overtook the Nissan Leaf’s all time sales. In May 2015 it outsold its nearest competitor by nearly three to one, indicating a strong market preference for the versatility and practicality of hybrid plug-ins over pure battery electric vehicles. The Outlander PHEV has a range of 32.5 miles in electric mode alone – more than enough to accommodate the average daily commute. The vehicle’sofficial fuel consumption figure is 148 miles per gallon and it has emissions of just 44g of CO2 per kilometre.

The Outlander PHEV accounts for over half of the 11,842 ultra-low emission vehicles (ULEV’s) bought in the UK this year. Sales of the vehicle are strong among company car drivers, who benefit from significant taxable benefit in kind savings (just 5 per cent), and corporate fleets that benefit from a 100 per cent first year write down allowance against profits, and reduced National Insurance contributions."

On the other hand, Nissan sold 362 LEAFs, more than half of all the BEVs sold in the UK in May (and almost two-thirds YTD).