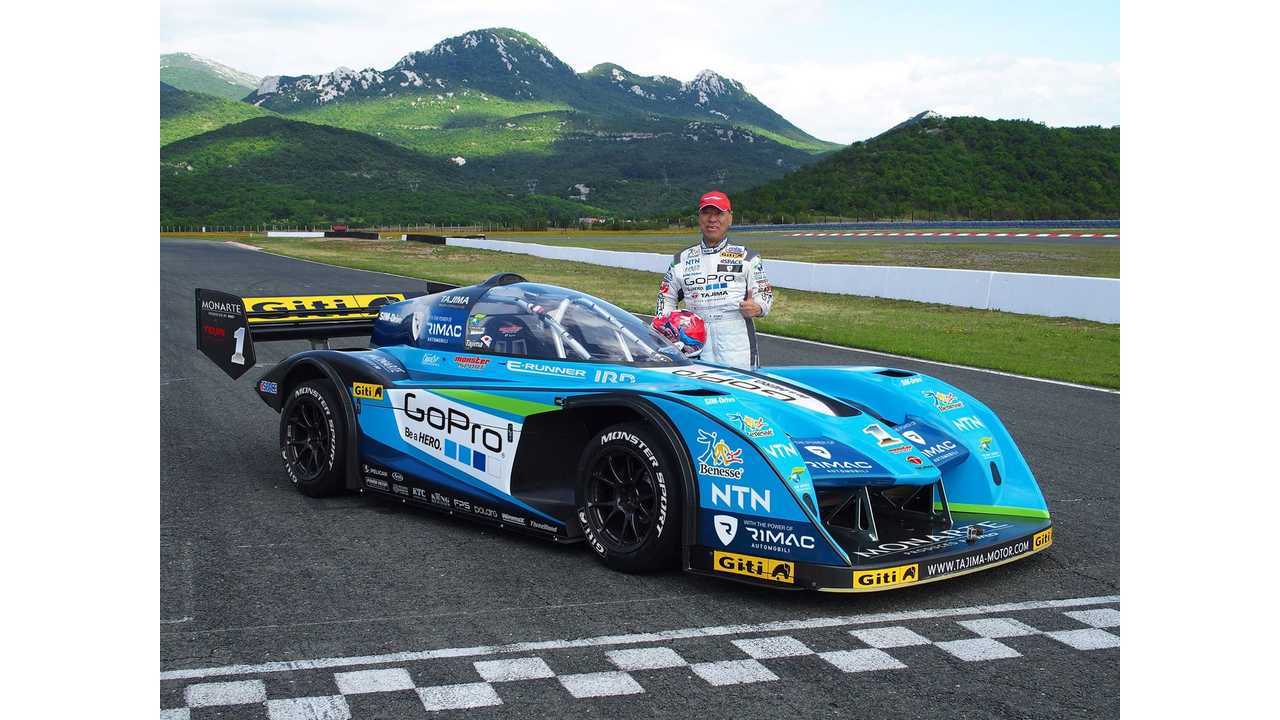 This is real beast with 1.1 MW power and 1500 Nm of torque. Power output is more than twice that of last year's Monster car.

Four independent motors for AWD are connected to the wheels via chain drive system and controlled by a racing version of the Rimac All Wheel Torque Vectoring.

"There are no gearboxes or differentials on this car. The power of each independent motor is transferred to each wheel by an innovative chain drive system developed specifically for this project, which saves a lot of weight and space. Embracing the Rimac Automobili technology, the Tajima Rimac E-Runner Concept_One features an adapted racing version of the Rimac All Wheel Torque Vectoring system, first implemented in the Rimac Concept_One. The Rimac AWTV controls the torque of each motor 100 times a second. The system can vary the torque on each wheel depending on the steering angle, speed, longitudinal and lateral forces, yaw-rates and number of other variables. The ECU runs the collected sensor-data through complex mathematical algorithms which calculate the optimum torque distribution on a millisecond-level. This enables the vehicle to take full advantage of the tires, squeezing the maximum out of their potential and giving the driver the desired vehicle dynamics at any given moment. Mr Tajima will thus have both the 1,1 MW of power and maximum grip in each of the Pikes Peak’s 156 corners."

"We measured 0-100 km/h in 2,2 seconds. 200 km/h comes in 5,4 seconds from a standstill. Cornering forces and stopping numbers are also impressive, but let’s not spoil the surprise. We are quite confident that Tajima Rimac E-Runner Concept_One will break previous year’s record. He is a great driver with tons of experience. Interesting fact – he raced Pikes Peak his first time a year before I was born. 28 years later, we work alongside to push the limits further. With the support of our best engineers and technicians, our technology, powertrain, battery-system and Torque Vectoring, he will be able to push the boundaries of electric race cars to a whole new level. Working with Mr. Tajima and his team is an amazing experience of which we enjoy every second."

Here is race and car description:

The Pikes Peak International Hill Climb race in Colorado has taken place since 1916. On average it features around 130 competitors from all over the world. This year the event is starting with practice sessions on Tuesday, June 23rd, culminating on race day, Sunday June 28th. The track is 19,99 km (12,42 miles) long, has 156 turns climbing 1,440 m (4,720 ft) from the start at Mile7 of the Pikes Peak Highway, to the finish at 4,300 m (14,110 ft).Tajima Rimac E-Runner Concept_One Technical data: