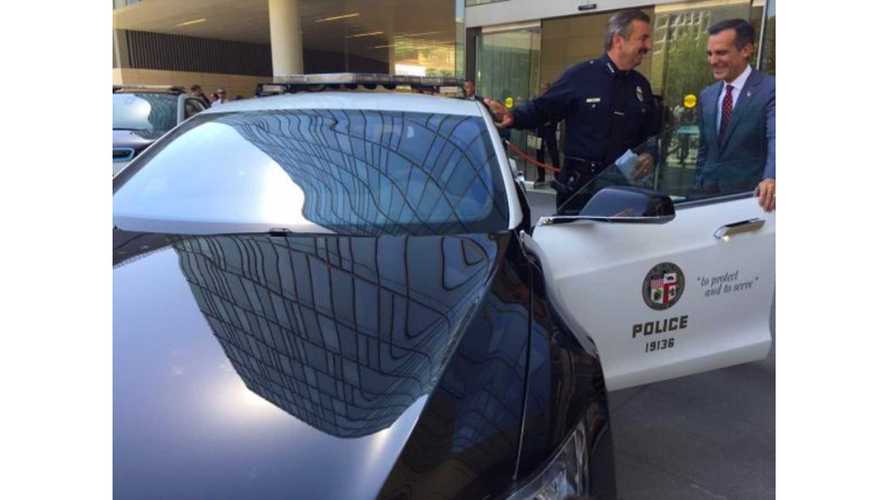 In front of a fully dressed, police-edition Tesla Model S P85D and BMW i3, Mayor Eric Garcetti announced that Los Angeles will now have the largest city-owned EV fleet in America.

In total, some 160 pure-electric (BEV) vehicles will be acquired along with 128 plug-in hybrids (PHEVs).

And like most Americans, LA has decided that leasing is the way to go when talking about utilizing a plug-in vehicle.  These new EVs will displace aging city petrol vehicles throughout the systen.

The LAPD blog breaks down how the plug-ins will be distributed:

The Los Angeles Police, Fire, General Services, and Water and Power departments will together lease the 160 BEVS. In addition, LADWP and the General Services Department will lease an additional 128 plug-in hybrid electric vehicles.

Last year, Mayor Garcetti initiated LA's "Sustainable City Plan", a part of which said that 50% of the city's light duty vehicles need to be EVs by 2017, and 80% by 2025.  This is the first major step in that plan.

“Today, we take another step toward becoming the most sustainable city in America. This year, Los Angeles will become home to the largest city-owned fleet of pure battery electric vehicles anywhere in the country, and we will save taxpayer dollars along the way.” - Mayor Garcetti.

LAPD BMW i3 Gets A Boast Before Heading Out On Patrol

As for the shiny new Tesla Model S P85D on display at the event - before anyone gets too concerned about the "taxpayer's money", the high performance all-electric sedan, and also the BMW i3 present at the ceremony were both provided/loaned to the city by the automakers for "testing and research by LAPD technical experts".

100 of the BEVs will be dedicated to the LAPD, making it the largest single departmental procurement to date. The BEVs will be used by detectives, investigators, and administrative employees. The LADWP will lease 44 BEVs and 113 of the PHEVs.

Just A Friendly "Heads-Up" To Would Be Speeders In LA

The city says the change in vehicle procurement policy will:

• Cut operating costs of the vehicles by an estimated 41% ($0.21 per mile for EVs vs. $0.37 per mile for conventional vehicles) • Free up City budget dollars currently allocated to finance the purchase vehicles, so City departments can invest in key infrastructure upgrades; • Reduce greenhouse gas emissions, the equivalent to planting over 20,000 trees, while lowering harmful smog forming pollutants like NOx and hydrocarbons