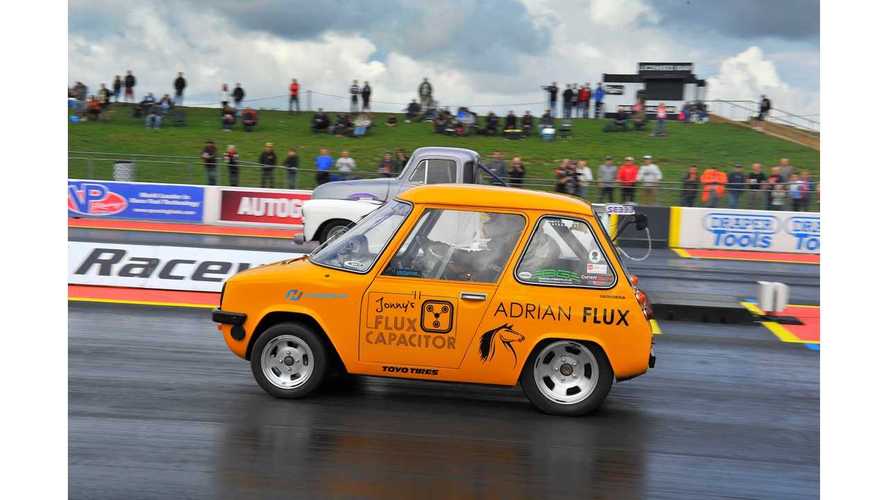 This is the new standard, so if you are Tesla owner and someone in a funky little orange EV proposes a race, do not be fooled. Instead, change the topic to frunk capacity - or how much more comfortable it is for you and your family inside.

Here is the full story on the 1975 Enfield 8000 electric city car, which began its racing career after turning 40 years old:

With the Fifth Gear presenter at the wheel, the tiny Enfield - boosted from its original 8hp to 1000hp - silently charged through the quarter mile in 10.84 seconds at 121mph, dismantling the Tesla’s record of 11.5 seconds.

“I still cannot believe what that little car is capable of,” said Jonny. “The little paper timing slip never lies, and when it revealed a 10 second pass I was so happy I kissed my crew mate Nick Farrow on the lips.

“This weekend the car not only clinched but blitzed the European record for a street legal electric car. Never in my dreams did I think the Enfield was capable of this kind of performance.”

He dubbed the car the Flux Capacitor with the idea of going Back to the Future of the electric car, and as a nod to the sponsor, insurance broker Adrian Flux.

Earlier in the year the car managed to run a 12-second quarter mile, then into the 11s.

But at Santa Pod this weekend the silent David was pitched against the piston-powered Goliaths. Jonny entered the highly contested Street Eliminator category, where some of the fastest cars compete, all with current MoTs, tax and running on street legal tyres.

In order to prove its road legal credentials, prior to the racing there is a mandatory 25-mile street cruise around the Northants countryside.

“This doesn't sound much for normal cars, but these are vehicles treading the fine line between all-out dragsters and Sunday cruisers,” said Jonny.

“If you break down and can’t get back to the race track without outside help, you're disqualified. Harsh, but we managed to keep our charge and complete the event.”

Qualifying with an 11.27 second quarter mile at 118mph, Jonny fitted taller axle gears to try to go even faster.

“We had two hours to recharge after the gruelling cruise before heading into race one. It wasn't a lot of time. To be honest I was happy to have qualified at all given most of my competitors are running over 1500bhp twin turbo V8s,” said Jonny.

And then, 40 years after it was built on the Isle of Wight, the car originally designed as an electric city runabout in the midst of the 1970s oil crisis, tore up the strip in a staggering 10.84 seconds at 121mph. Not quite 1.21 gigawatts of power, but 1900 amps and over 250 volts of electric muscle.

“This would be a serious feat for a modern supercar, let alone something 2.8 metres long that was designed for a maximum of 40 mph,” said Jonny.

“I was racing against a 2000bhp Nissan GT-R, so I knew I'd need some miracle to win. With a 10 second quarter mile in a tiny electric car in front of thousands of spectactors, I couldn't have been happier to lose.

“While it is a very left-field project, the attention the Flux Capacitor got over the last few days is ridiculous. We had serious dyed in the wool drag racers come over and give us respect. I think - I hope - the Flux Capacitor has gone a little way to showing people that electric cars are nothing new, and that they can be charismatic and mighty fast.”

The question now is, can it go even faster?

“Maybe,” said Jonny. “I'm just chuffed to have achieved two major hurdles. Firstly completing the mandatory 25 mile street cruise around Northamptonshire without breaking down or accepting 'outside' help. It was tough, I won't lie...three days before the event me and my brother were busy getting the hazard warning lights and horn to work properly!

Of course, the Enfield is also tax and London congestion charge exempt.

“When I started this project I estimated a 12.5 second quarter mile, which we achieved within six runs of the car back in May,” said Jonny.

“A few months later we got into the 11s and now we're running in the tens. And it never once tried to bite me. Despite its ludicrous proportions the car just gripped and ran straight and smooth. It's a testament to the specialist engineers I chose to get involved with the project like Current Racing, Webster Race Engineering, BG Developments and GAS IT.

“It simply wouldn't  have been possible without the support of Adrian Flux insurance, so I'm glad I phoned them by chance to check they'd be able to insure the car before starting to build it. It feels apt that 30 years after Back to the Future my Flux Capacitor has seen 88mph and beyond.”

Background and technical specifications then and now

Born during the 1970s oil crisis, British motorcycle company Enfield set up an eco car company on the Isle of Wight headed by design engineer John Ackroyd, who was later involved with the 'Thrust 2' land speed world record car. Seriously.

Made with an aluminium bodyshell and steel space frame (the same as Aston Martins of that time!), the rear wheel drive 8000 had its own on-board charger, run-flat tyres and even a heated windscreen.

Although it nicked a lot of bits from existing cars of its time like the headlights (Allegro), front suspension and steering (Hillman Imp), the Enfield cost two and a half times more than a Mini. Oh dear.

Its 1.72-metre wheelbase was 31cm shorter than the original Mini. Titchy dimensions and a 8hp 48-volt 6kW electric motor with 8 lead acid batteries made it the perfect city car. The Enfield could do up to 55 miles and max out at 40mph.

120 Enfield 8000s were made, 60 of which were purchased by the British Electricity Council as pool cars. My car is chassis number 003 and was supplied new to SEEBOARD (South East Electricity) in the Brighton area. Around 30 exist worldwide now.

RANGE: 35-55 miles, depending on climate and quantity of hills

The Flux Capacitor (e)mission statement was to resurrect a forgotten British electric relic and drag (race) it into the 21st century using modern leccy technology.

Why? To be Europe's fastest street legal electric vehicle. It was never going to be the prettiest.

It took 18 months to find this flood damaged car and three years to transform from 6kW city car into 600kW silent-but-violent midget.

Hyperdrive Innovation built the lithium-ion battery pack and battery management system to fit under the bonnet. The latter keeps the cells balanced and safe during charge/discharge. A drive-by-wire controller (like an ECU) is mounted under the passenger seat which is tuned via laptop, where you can adjust volts (top speed) and amps (torque).

It will get from 0-100mph in about 7 seconds. It's as fast as many supercars on the quarter mile, despite being stupidly short.

And video from the record run: