Electric Car Charger Market To Grow To 12.7 Million Units In 2020 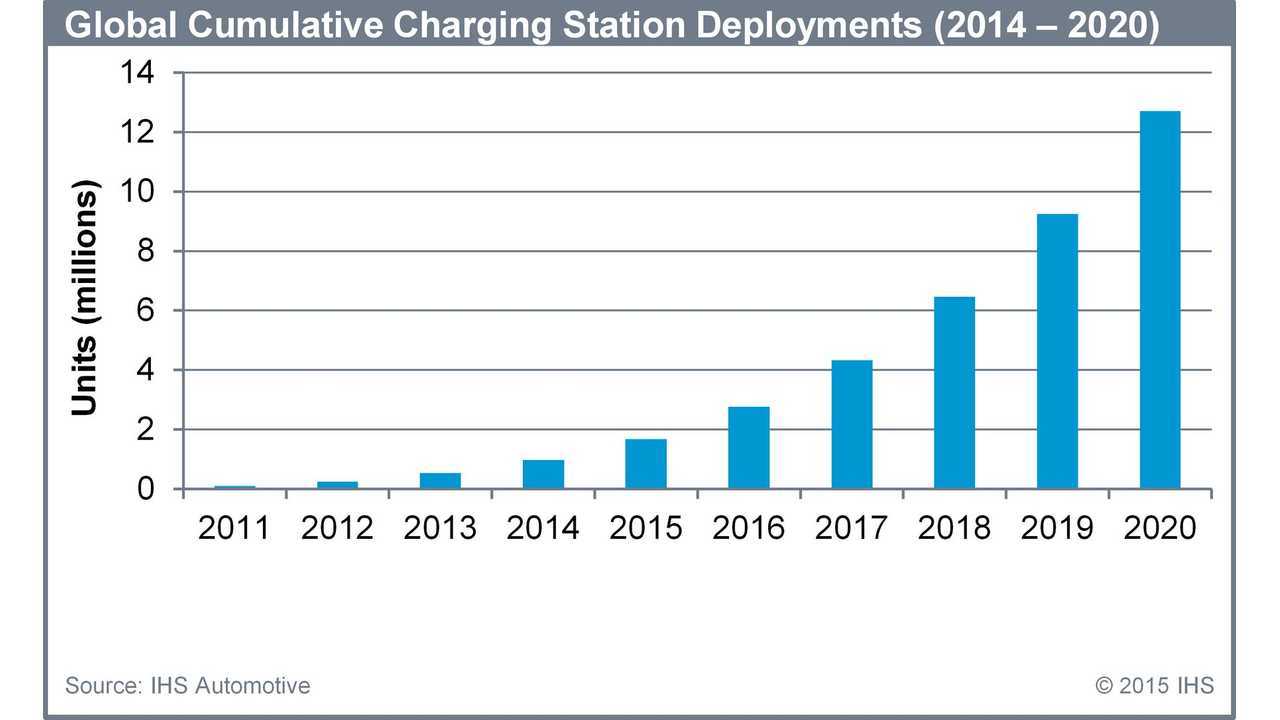 IHS Automotive, in its latest report on EV Charging Infrastructure, forecasts 12.7 million EV Chargers (EVC) around the world by 2020 with sales of 2-3 million annually.

The current number in use today is estimated at more than 1 million (majority are home charging units).

There are also other topics of the study like AC vs. DC. IHS Automotive sees AC charging as a crucial method, while DC charging will supplement infrastructure for fast charging.

"IHS Automotive foresees that AC charging is to play a crucial role in the public domain of the EV charging infrastructure. According to the report, approximately 10 percent of EV charging stations by 2020 will be within the public or semi-public domain, whereas the global DC charging stations are expected to be relatively low and located on the outskirts of cities and highway infrastructure, rather than located in dense urban areas.

“AC charging stations are the dominant type of plug-in vehicle charging type, and we expect AC charging to retain its position long-term. AC charging is also an inexpensive and convenient way of charging requiring much smaller upgrades of the electricity grid, whereas DC charging is best suited for ‘en route’ charging.”

Which countries lead and which are still sleeping? Well, Japan already passed a milestone of more charging stations than petrol stations. In Europe, the Netherlands, UK and Norway lead the way, with Germany and France expected to join later.

“We recognize the potential of Germany and France,” said Scott. “They are the ‘sleeping giants’ of e-mobility, but their EV charging station networks are currently underdeveloped with respect to the size of those countries.”

In the US, everything depends on the particular state:

“In the U.S., EV charging station deployments are primarily driven at the state level. As an example, the ‘greener’ states, like California, deploy more EV charging stations than others,” Scott said. “This is highly dependent on the individual state’s level of incentives and legislation supporting the adoption of EVs, along with regulations for fuel economy.”

Here is an interesting statistic on fast-rechargable EVs, which by the end of 2014 mostly were CHAdeMO-compatible. IHS Automotive expects that Combo will gain popularity in the next couple of years.  There are also other standards like Tesla, AC (probably 43 kW Renault ZOE) and maybe Chinese chargers, which have a different plug.

Japan has more than 2,800 DC fast charging stations, using CHAdeMO, the Japanese fast-charging standard. Japan accounts for roughly 50 percent of the global total of all CHAdeMO stations, according to the IHS Automotive report.

Europe and North America also have their own fast charging standard, Combined Charger System (CCS). This type of a fast-charging station is supported by the majority of OEMs, such as Audi, BMW, Daimler, Chrysler, Ford, GM, Porsche, and Volkswagen. Vehicles with fast DC charging capability based on the CCS standard have only been on the road since 2013.

From 2010 to 2014, IHS forecasts that just seven percent of electric vehicles globally use the CCS charging system and about 65 percent use the CHAdeMO standard. IHS expects this will change over the short to mid-term, as more vehicles with the CCS standard enter the vehicle parc (vehicles on the road). There will gradually be a more even split between the two DC fast-charging standards."

"According to the report, the mix of plug-in vehicles (EVs and plug-in hybrid electric vehicles - PHEVs) in the vehicle parc also has an impact on the rollout of EV charging station deployment. IHS Automotive forecasts that in 2016 for the first time, global PHEV production will exceed pure electric vehicle production and is expected to remain that way for the short to mid-term.

The accelerated production of PHEVs is motivated by meeting CO2 targets while remaining cost effective.

“Although there will be many more plug-in vehicles on the road, realistically it is the ‘pure’ EVs which will make most use of available charging points,” Scott adds. “EV production is also increasing and we expect charging infrastructure to rollout respectively.”