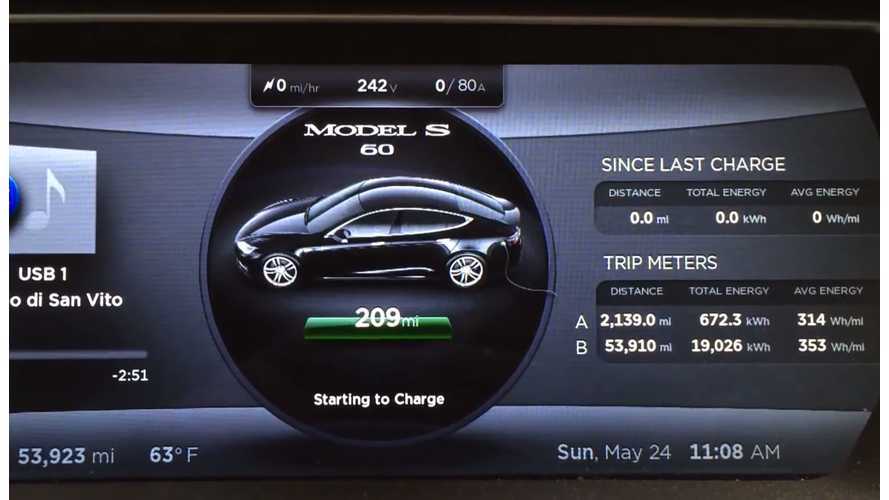 Well-known Model S owner & YouTuber, KmanAuto, has gotten range back on his 60 kWh battery pack after one month of max charging, and a few recent mini (bug fix) firmware updates.

When Kman got his battery pack replaced 20,000 miles ago, some range had been lost only after two weeks (2,000 miles) on that pack, and nobody was sure why...

Well, as we just mentioned, after a few small firmware updates and 1 month of 100% charging, Kman has seen a range increase from approximately 200 rated miles to 209 rated miles!

So, during Kman's one month of max charging, he did not leave it sit at 100%, as he used his Model S right away.

Kman further explains this, as well additional info on the battery pack range increase in this video below:

As you have just heard in the video: If you do not need 100%, do not charge to that level. If you charged to 100% 365 days out of the year, the pack will degradate a bit faster than normal.

As these videos repeatedly mention, it is about battery balance and to make sure each of the cells in the battery pack are healthy. So, a 100% charge once or twice a month is a good thing for your battery pack, as long as you do not leave it sit at 100%!

We highly recommend you take notes on all of these videos. Wouldn't you like to see a range increase on your Model S (& possibly other plug-ins), and have a healthier battery pack?

Got some range back, and maybe you can too! (Photo Credit: KmanAuto)