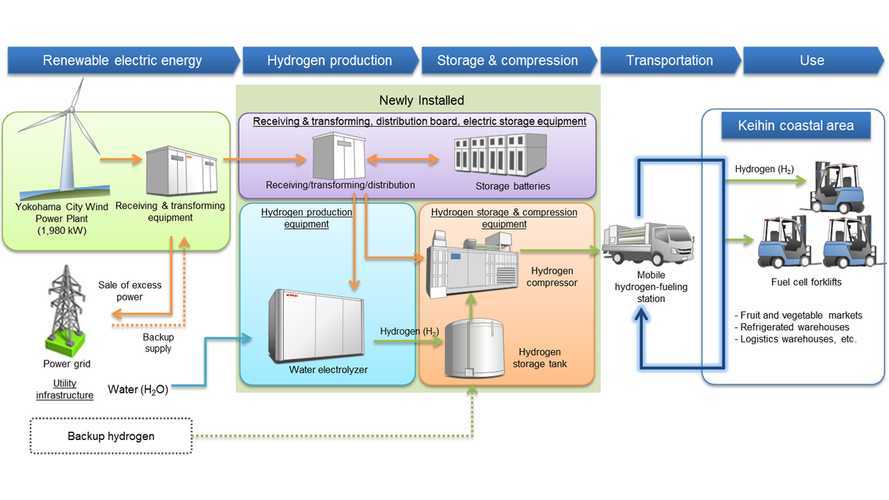 Toyota, with partners, intends to launch a four-year project with mobile hydrogen fueling stations in Japan - near the cities of Yokohama and Kawasaki in the Keihin coastal region.

One of the goal of this feasibility study is to achieve carbon-neutral hydrogen supply chain. Implementation is set to begin from April 2016 onward.

The weak point is of course efficiency of the process and added infrastructure costs compared to the electricity grid, which could nearly directly feed energy to electric forklifts.

"Hydrogen has the potential to permanently change the way we generate and use power. It can be created using renewable energy sources, stored, transported, and used at a later point―all with minimal environmental burden.

While hydrogen is most commonly created through a reaction between methane and steam, it can also be created from water through electrolysis. More often than not, this requires electricity―which is still typically produced using fossil-fuel-burning power plants. Since the overall environmental benefit of hydrogen is only as strong as the method used to produce it, global research initiatives around the world are dedicated to developing large-scale carbon-neutral projects that use renewable energy to power hydrogen production.

Under this trial project, wind power will be used to turn water into oxygen and hydrogen, with the latter stored for use locally. Grid power will only be used for backup when absolutely necessary and excess renewable energy produced may even be sold to utility companies.

As plans currently stand, the project will involve

On the public sector side, the project is being implemented by the Kanagawa Prefectural Government, Yokohama City, and Kawasaki City. The four private sector participants are Iwatani Corporation, Toshiba Corporation, Toyota Motor Corporation, and Toyota Turbine and Systems Inc. In addition, the project will be supported by Japan's Ministry of the Environment."

Oh, and by the way, Toyota recently presented Mirai in London: