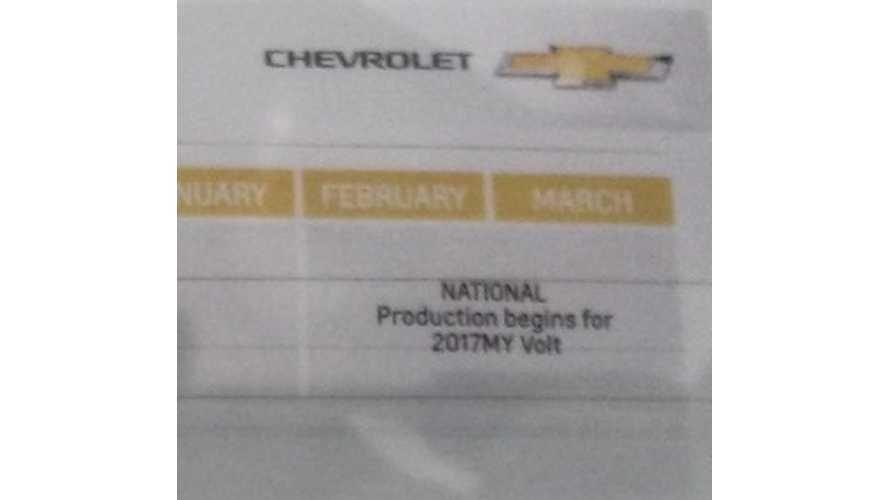 It seems that the nationwide launch of the next-generation Chevrolet Volt has been delayed from November 2015 to February of 2016.

"Chevrolet has a shortened model year for the 2016 Chevy Volt that will have a limited distribution network. The 2016 Volt will be sold in our strongest EREV markets. The 2017 Chevrolet Volt will begin production early this spring and will be available throughout the country."

According to dealership timeline data (graphic above via gm-volt.com forums), nationwide availability of the next-gen Volt won't happen until the 2017 Model Year Volt goes into production in February of next year, with deliveries expected closer to mid 2016.

Could An Early 2017 Production Schedule For The Nationwide Release Indicate The Addition Of A New Trim Level?

So the 2016 Volt will be available to customers in California, and 10 other recently opened states - Oregon, Connecticut, Maine, Massachusetts, Maryland, New York, New Jersey, Rhode Island, Vermont and New Hampshire.

Seen above is the latest timeline for the next-gen Volt. This info was made available to dealers just days ago according to the poster.  The below graphic is the timeline that was released four months ago for the Volt launch - showing national orders opening on October 1st, and production beginning in November.

We are curious as to why General Motors has decided to make the Model Year 2016 Volt run so short and wonder why the automaker is starting 2017 Model Year production so early in February of 2016.

As a rule of thumb, early model year changes like this indicate significant changes to the car itself, or changes to its lineup.  Given production is just now underway, we don't see a lot of physical changes that could be done - but the introduction of a new trim level - such as a less expensive base edition, or new advanced option sets could be a possibility.

Update : GM spokesman Mike Albano told the Automotive News, that yes indeed, the 2017 model will be enhanced, saying that “We’re pulling ahead the ’17 a bit to get additional content into the car,” while adding those changes would not affect the drivetrain.

This new model year would also coincide with the Volt's engine production moving from  Toluca, Mexico to GM's new production line in Flint, Michigan.  Last week GM announced further details on that facility'snew manufacturing timelines, so it appears this 2017 model will have a higher domestic content thanks to its US-built engines.

"Once production of the 1.4-liter engine ends this week, the facility will complete installation and testing of equipment with the first production engines heading to GM’s Lordstown, Ohio, assembly plant for the Chevrolet Cruze before the end of the year. Volt production will begin later in 2016."

Curiosity aside, this apparent delay in nationwide availability is unexpected and could affect sales. Buyers who were hoping to cash in on the federal tax credit this year will now have to decide if they want to wait until next year for the Volt, or purchase some other car that qualifies for the credit.