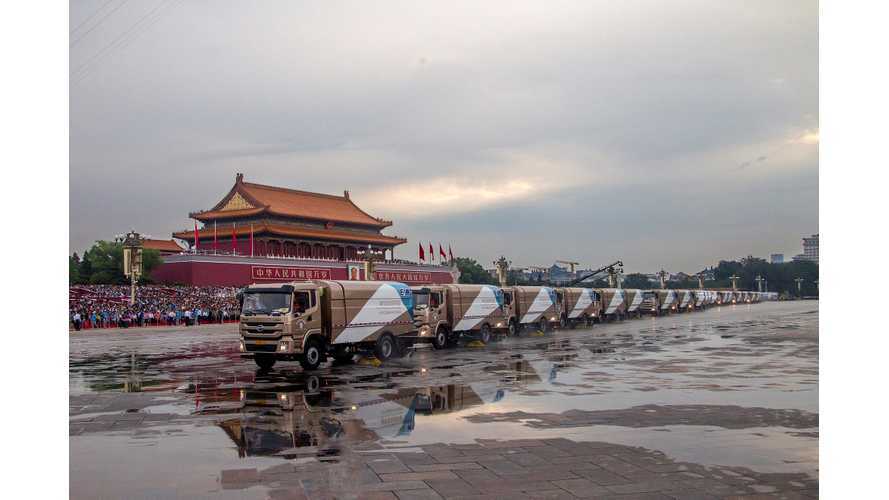 The BYD T8SA on duty in Tiananmen Square

At the recent military parade in Beijing’s Tiananmen Square celebrating the 70th anniversary of the end of World War II, BYD was present with a fleet of all-electric T8SA sweepers.

Vehicles were acquired by the city, which means that the BYD T8 isn't just a prototype, but rather a commercially available product.

There is a lot to sweep in Beijing judging by the length of the parade.

"BYD T8SA electric road sweepers – built by BYD and Beijing Environmental Sanitation Engineering Group Ltd., the body responsible for the city’s sanitation. This is the first time a military parade has been held to commemorate the event, in a move to showcase not only China’s military might, but also the importance the country places in sustainability and the advancement of its domestic green technologies and manufacturing.

The BYD T8SA is a pure electric truck specifically designed for urban sanitation – with zero emissions, low noise and low heat radiation, it sweeps widths of up to 3.5 meters, has a maximum speed of 85km/h (53mph), 350kWh power batteries that fully charge in just 3.5 hours and grant the vehicle 7 hours of continuous operation. Altogether, such features can greatly optimize a city’s cost and emission reduction targets, thus proving the ideal choice for Beijing.

With increasing worldwide environmental pressure and the continuing concerns about the use of fossil fuel, many countries are adopting incentive policies to reduce consumption of fossil fuels and promote alternative energy sources, with China taking the lead on all levels with city, province and country policies that set clear emission and electrification targets for the near future. As a result, BYD has developed its 7+4 electrified transportation strategy, in which it is set to provide electric vehicles for every transportation need. There are 7 vehicles for conventional fields: Transit Buses, Coaches, Taxis, Logistics Vehicles, Construction Vehicles, Waste Management Vehicles – the category of Beijing’s T8SA – and Consumer Vehicles; and 4 vehicles for specialized fields: Warehouse Logistics Vehicles, Mining Utility Vehicles, Airport Utility Vehicles and Sea-port Utility Vehicles."