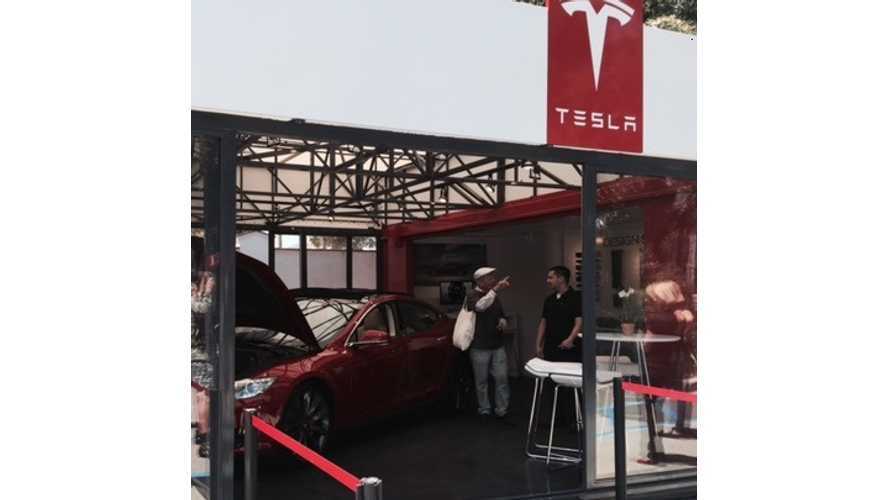 Tesla has debuted the company's first US pop-up store today in Santa Barbara, the first stop on a tour of wealthy destinations in the US.  And we are on the ground with an exclusive look.

Once the event is complete, the 20 x 35 foot store collapses into two shipping containers and is loaded onto a lone flatbed truck before moving on to the next destination.

The mobile boutique  shows a flexibility that could never be achieved via a traditional dealership model, where franchisees are all granted certain territorial rights.

“Designed in-house, the shipping container arrives and unfolds to double its size in just a few hours.  The mobility and convenience of the design allows Tesla to bring our unique retail approach to customers in new locations where we do not yet have a brick-and-mortar location.”  - Tesla on the innovative new format

The main focus of the store is selling the Model S, and as such the unit features the car itself, its components, options and battery architecture.

Once the shop closes up in Santa Barbara, it is off to the Hamptons.   After that?  No one knows, as Tesla isn't divulging where it could appear next - hence the "pop up" concept.

Considering there at least three similar units to this travelling around Europe (currently in France, Denmark and Switzerland) - generally in locations Tesla doesn't as of yet have viable full time locations to sell cars, the program must be considered a success for the company to bring it stateside.

If you are in the area and want to check it out in person, it is at the corner of Chapala and Carrillo Streets in Santa Barbara, around where the old Greyhound bus station was, if you are a local.

Special thanks to David Wexler for making the trip and taking some great shots of the Tesla store!