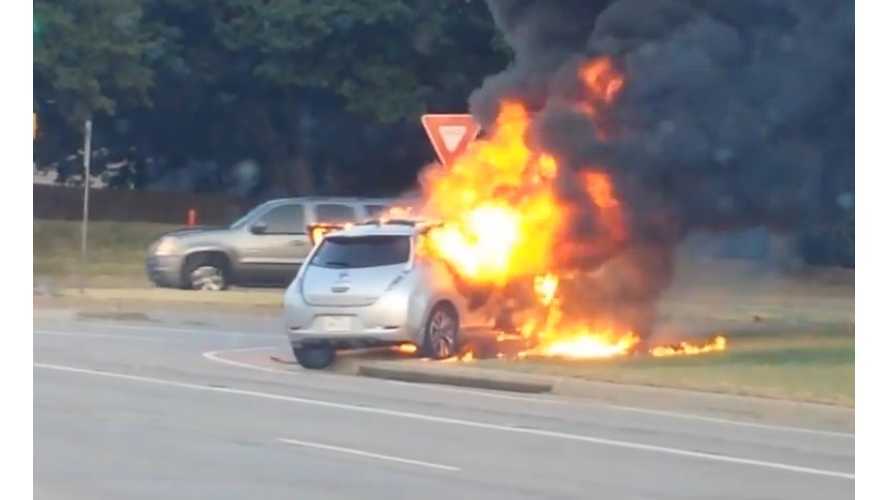 By: Jay Cole
A Nissan LEAF was caught on video this past Tuesday on fire near a yield sign in Flower Mound, Texas.

We still don't have any specific cause for the blaze right now, and are in no way suggesting this has anything to do with the electrified components of the car.

As a point of reference, the Nissan LEAF battery cells are incredibly hardy, and near impossible to ignite (check below clip for more), so we highly doubt the cause (or the subsequent fire) was battery related at all.

In other words: "keep your pants on" wider media.

Some sparse clip details come by way of MyNissanLeaf community member board350:

"So a LEAF caught fire and burned up yesterday. My boss's wife was driving by and got this video. I don't know much more than that but I am very curious if anyone knows what caused it? ..."

Details we know so far on the accident:

The incident itself happened at the intersection of FM 1171 and Kirkpatrick Lane, with the Fire Department on the scene in the morning.  The town Fire Chief updated that the was no injuries from a result of the incident, but the LEAF was pretty much toast by the time the firefighters arrived.

This intersection is right on top of a local police station, so there was a strong police presence at the scene immediately.

We will endeavour to follow-up and update the story as to the cause of the fire when more information is made available.

To get an idea of how difficult it is for a Nissan LEAF battery cell to ignite, have a look at the (below) video:

via MyNissanLEAF/board350, Hat tip to Dave S and Matt T!