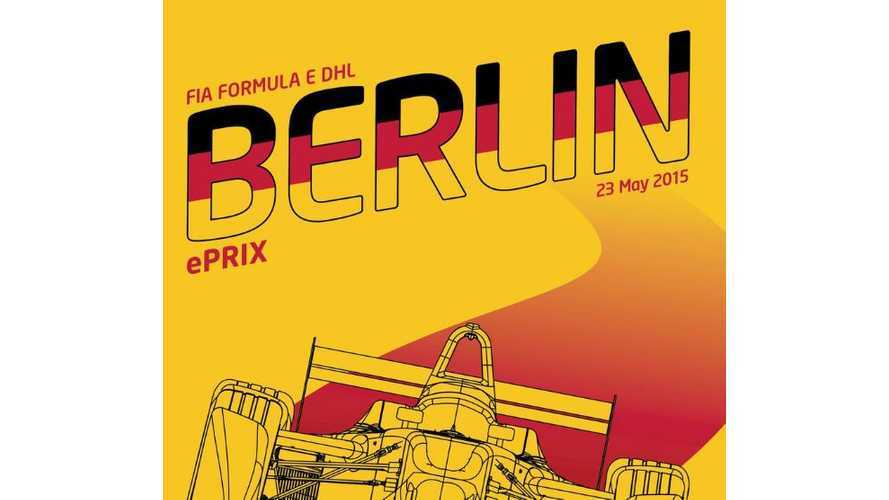 Round eight of the Formula E racing series is now officially in the books.

This race, the eighth in a series of 10, took place in Berlin Germany.

Before covering the actual race, here are the results from qualifying:

And some notes from qualification from Formula E:

Trulli storms to pole in Berlin

Jarno Trulli clinched his first Formula E pole position clocking a 1:21.547s to start at the front of the grid for the DHL Berlin ePrix.

The Italian driver, who was renowned as a one-lap specialist in previous categories, posted his time in the first qualifying group extracting the most out of his car in the technical final sector.

Trulli said: "I'm really happy with this. It was a clean, smooth lap. I didn't try to attack too much and just tried to put in a reasonable lap. We've worked hard over the last two races on finding extra speed. It didn't quite work in Monaco but here it did. The team is feeling more confident now and we'll have to see what happens in the race with tyre degradation and managing the battery."

Audi Sport ABT star and championship leader, Lucas di Grassi came closest to toppling Trulli from the top of the timesheets and will start in second place on the front row.

Di Grassi said: "Of course, it's good to be in this position but you don't win by pole so we'll have to see how the race plays out. I'm really happy for the team, they've done a great job with the car and on their home event. We'll have to see what we can do from the front row."

Buemi added: "That was a good lap and overall I'm happy. Lucas is up there as well so we'll have to see. The first sector wasn't as good for us and I wasn't able to hook everything up together but let's see what we can do."

The race itself was eventful in that the race winner was later disqualified and stripped of his win.

In contrast to his Beijing ePrix win where he led for just the final few hundred metres, in the DHL Berlin ePrix it took him just a few hundred metres to take a lead that – pitstop period aside – he dominated from the front.

Di Grassi took full advantage of a mistake by poleman Jarno Trulli to slide his Audi Sport ABT entry into the lead through Turn 3 of the opening lap. By the end of that tour he led by almost two seconds, by the end of lap two it was 4.5s!

With Trulli’s car consuming energy at an alarming rate, the Italian was forced to adjust his pace accordingly. This resulted in the rest of the field queuing up behind him. Sebastien Buemi led the charge, finally using his FanBoost – the first time the e.dams-Renault driver had won the vote – to take second place.

This opened the flood gates as the struggling Trulli was powerless to stop the onslaught. However, by now di Grassi was 10 seconds up the road and already thinking about pacing himself as the car-change pitstops approached.

"I didn’t know how Jarno would play the race, but he made a mistake in Turn 3 and I was able to pass. I knew I could use this advantage to make a gap and I pushed very hard. Not beyond the energy level – we had a very safe strategy – but I managed to drive on the limit for 10 laps and open up the lead. After that it was just gap management, and making sure it was under control."

Having taken advantage of Daniel Abt’s spin into Turn 2 on the opening lap, the charging Jerome D’Ambrosio had worked his Dragon Racing car into third by the time the majority of the field pitted to jump into their second cars.

A slick pitstop – hitting the 63-second minimum time on the head – took him ahead of Buemi and into second. He ultimately reduced di Grassi’s winning advantage to 7.5 seconds, but he knew that the game was up when the Brazilian had slipped by Trulli so early on.

"It could have been a different story,” he admitted, “but you build a race from your qualifying, and we started in P6. I knew Lucas would try to build a gap once he passed Jarno so I started trying to work my way up right away. He had great pace and maybe we could have challenged if we'd got to the front sooner, but in the end second is fantastic."

But things couldn’t have been very different for di Grassi as his car went into error mode just seconds after he crossed the line. It meant his victory lap was completed on a tow rope, but that could not dampen his spirits as he extended his points lead to 17 over Nelson Piquet Jr.

Despite lacking the pace he showed on his way to victory in Monaco, Buemi was satisfied with third and is confident of a return to form as the series hits Moscow on June 6, although he is now 20 points down on di Grassi.

"I’m quite happy with the result because I felt it was not our weekend,” said Buemi. “We were slow all weekend. So it’s good to get the points for third place. We didn't nail the setup of the car or the tyre pressures."

Having started back in 13th, Piquet made ground when Abt spun and used his FanBoost to quickly work his way into the top 10. Once again he consumed his energy sparingly and he and NEXTEV team-mate Charles Pic were able to pit a lap later than their rivals.

Piquet resumed from the stops in eighth, but that quickly became seventh when Amlin Aguri’s Antonio Felix da Costa was penalised for not adhering to the pitstop time.

With more energy to hand than the cars ahead, Piquet battled his way by the Venturi drivers and was locked in a tight battle with Loic Duval that ran right to the finish. Duval made it the best race so far for Dragon by taking fourth, while fifth place plus two points for the Visa Fastest Lap was a good recovery for Piquet after an unexpectedly poor qualifying.

Heidfeld and Sarrazin held on for sixth and seventh to give Venturi its biggest points haul so far, while in the closing stages the most exciting battle was between Andretti’s Jean-Eric Vergne and Virgin Racing’s Sam Bird.

At one stage they even touched… “it was just a love tap,” joked Bird, who came home ninth.

After a barnstorming opening few laps, which took him to fifth place, Vitantonio Liuzzi suffered a nightmare pitstop when his Trulli car stalled as he engaged first gear. The delay dropped him outside the top 10, but he fought back to claim the final point in 10th, breaking his Formula E duck in the process.

Trulli’s woes continued into his second car, and such was his energy use he was eventually forced to retire his car with two laps to go. However, he had done enough to ensure that for the first time ever in a Formula E race, all drivers were classified finishers.

With three races now remaining the title fight appears to have boiled down to a three-way fight between di Grassi, Piquet and Buemi, but with the pace Dragon and D’Ambrosio showed in Berlin, don’t rule out a win for the Belgian before the end of the season.

But just a few hours later, Di Grassi was "excluded" from the race for wing violations.

Race winner Lucas di Grassi has been excluded from the DHL Berlin ePrix after his Audi Sport ABT car was found to have been running with a modified front wing.

The race-winning car failed post-race scrutineering where it was discovered that the front wing fairings had been modified to include internal metal reinforcing rods. In addition the stewards found that six of the eight holes in the front wing had been sealed. The remaining two holes were found to have had helicoil inserts and chamfers made and that the front flap and gurney LH 220 has a filler layer added and chamfer made.

The team argued that these changes were made as a result of repairs and that they offered no competitive advantage, however, they were deemed to be in breach of Article 3.1 of 2014/2015 FIA Formula E Technical Regulations and the exclusion was made.

Audi Sport ABT has decided not to appeal the decision.

The decision means that Jerome D’Ambrosio is now the winner of the race and Nelson Piquet Jr is now in the lead of the championship, 10 points ahead of di Grassi.

So, Jerome D'Ambrosio picked up his first Formula E win and Piquet Jr jumped into the points lead.

Below are several videos from the race.