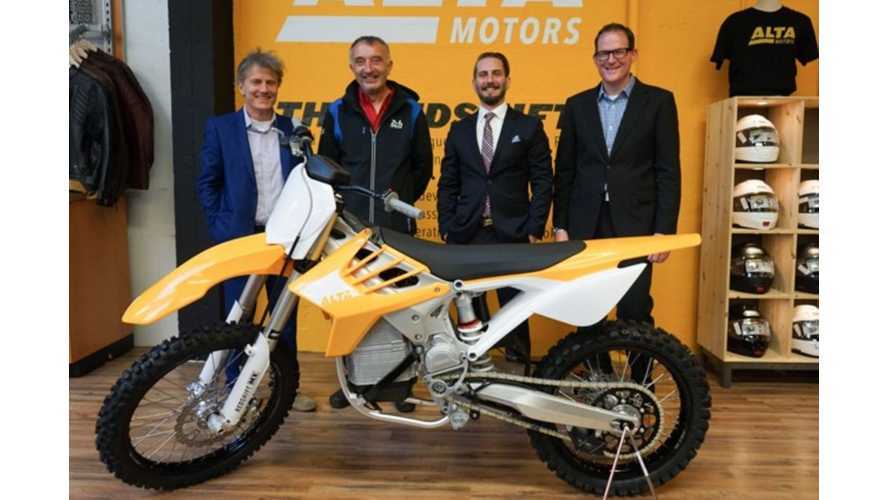 The first Redshift MX was purchased (through BMW Motorcycles of San Francisco) by Eric Gauthier and Jeannine Smith, who own and operate Suspension Performance in Mountain View, CA.

“We’ve been quietly driving towards this moment for over 8 years in pursuit of creating the best motorcycles money can buy. The result is a machine with a whole suite of new technologies, and a very different motorcycle than anything that has come before. The Redshift feels immediately comfortable to anyone who has ever thrown a leg over a state of the art performance motorcycle, but offers a leap forward in control, feel, and the connection between the rider’s brain and the tires on the ground. To have successful, speed-minded customers like Eric and Jeannine take delivery of the first Redshift is a tremendous honor for Alta Motors.”

Alta Motors was founded as BRD Motorcycles in 2007 and later changed its name:

"Alta Motors began in 2007 as an idea – what the perfect torque delivery of electric drive could do for motorcycle riders and racers. Officially founding the company in 2010, Marc and his partners, Derek Dorresteyn and Jeff Sand, have been obsessively churning out ground-breaking technology to build the RedShift, a legitimate performance electric motorcycle capable of competing against any bike and power plant on the grid. The Alta team now includes the very best from Tesla, GM, Toyota, Volkswagen and AMA racing.

The RedShift isn’t put together from off-the-shelf motors and electronics from automotive, bicycle, industrial or even aerospace applications. This electric motorcycle is a clean sheet, proprietary design.  Every part was created, tuned and tested for pure performance on-road and off."

Highlights of Redshift performance was shown in November when Redshift SM won against gas-powered competitors:

"Recently, the Redshift SM proved its outrageous performance by winning the IMS Sacramento round of the Supermoto USA race series held November 6-8.  Alta Motors technician and pro racer Kevin Butler took the Redshift from the last place on the grid to first across the finish line in his first-ever supermoto race.  The victory also marks the first time an unmodified, production electric motorcycle triumphed over gas-powered competitors."