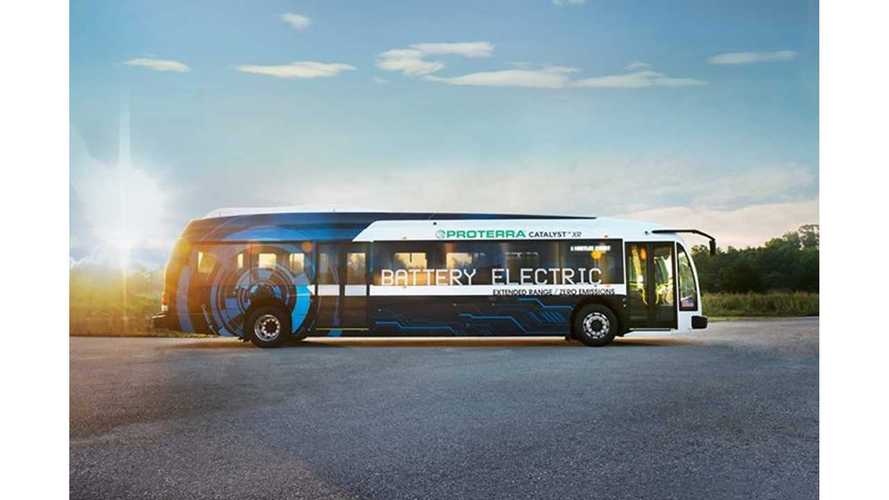 Catalyst XR is a long range bus introduced in 2014 with battery packs from 129 kWh to 321 kWh. This particular model with record range had 257 kWh.

We are not sure about the relation of this record to real-world driving range on different routes, but it sure seems to have the potential to drive just like a conventional diesel bus with overnight charge.

"Based on these test results, Proterra predicts its ten pack XR configuration (321kWh) will achieve 300 miles on a single charge. According to available General Transit Feed Specification (GTFS) data, typical urban and rural bus routes in the United States run less than 200 miles a day, bringing most routes within reach of Proterra's current technology. "

"Beyond meeting a given route's minimum range requirements, Proterra electric vehicles are poised to make a significant impact on the transit market because of the Catalyst's low operational cost per mile compared to diesel, CNG, and diesel-hybrid buses. Over the 12-year life of a bus, Proterra customers will dramatically reduce maintenance costs, saving around $135K. The environmental benefits are also making an impressive impact. Collectively, Proterra customers have logged more than 1.3 million miles of revenue service to date, preventing more than 4.7 million pounds of emissions."

"The purpose-driven Catalyst design affords the best efficiency rating ever for a 40-foot transit bus, at 22 MPG equivalent. Proterra buses are the only mass transit vehicle built from the ground up as an electric vehicle. With a unique aerodynamic body made from carbon fiber and advanced composite materials, we are able to reduce mass for maximum efficiency."

"The U.S. is quickly waking up to the economic, environmental, and performance benefits of zero-emission electric buses. While diesel buses pollute our communities and are increasingly more costly to own and operate, Proterra is pushing the bounds of EV technology and steadily driving down costs. Achieving this range is validation for our technology and gives us the confidence that Proterra is capable of what we initially set out to accomplish - replacing every fossil fuel bus in the United States with a fully electric one. "

And here we have video: