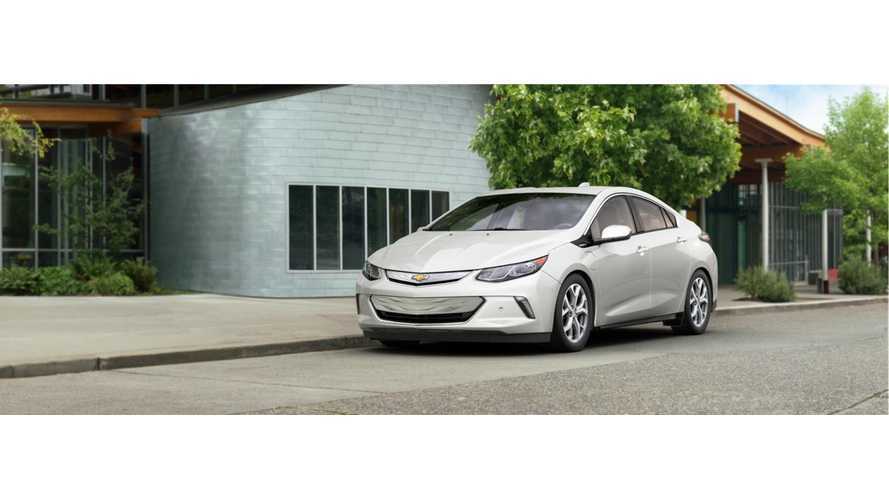 General Motors has announced Canadian pricing for the 2016 Chevrolet Volt:

Canadians likely won't be thrilled by General Motors' choice to only slightly discount the 2016 Volt.  In the U.S., the base 2016 Volt checks in $1,175 cheaper than the comparable 2015 Volt.

Editor's Note: It seems that the currency fluctuation over the past few years (the Canadian dollar has fallen off significantly versus the US Dollar), has put GM into a bit of a spot when trying to price the new Volt's MSRP less than the outgoing version, as the only slightly cheaper 2016 edition's price of $39,990 Canadian actually works out to be $30,800 in US dollars.

A year ago, $35,700 (CAD) was equal to $32,800 (USD), and just over two years ago the two currencies were trading dollar-for-dollar.  So when speaking about the price of the 2016 Volt in US dollar terms for Candians - it is a steal; although Canadians may not feel that way in the pocketbook.

A General Motors Canada spokesperson says that the Canadian base 2016 Volt includes some added items to deal with Canada's cold temps.  Those items include heated seats, steering wheel and outside rear-view mirrors.

You'll find additional pricing details, as well as some info on the Canada-specific 2016 Volt in the full press release below:

Next Gen delivers more technology at new price as low as $29,890

Oshawa, Ontario (Wednesday, May 20, 2015) – The Chevrolet Volt is poised to continue to bring new owners to the electric plug-in family. Pricing will be as low as $29,890 after the full provincial incentive of $8,500 (Ontario). Provincial incentives in Canada range from $0 up to $8,500. In response to Canadian Volt owner input, the next generation car will feature unique content that is packaged to optimize the all-electric driving range.

Current Volt owners have found heated seats and steering wheels to be a comfortable alternative to using the full HVAC system, allowing increased electric range during Canada’s winter months. For 2016, the base Volt model in Canada will be standardly equipped with the following cold weather features:

The Volt continues to be a success for the brand with nearly 70 percent of Volt owners trading in a non-GM product or adding to their household fleet in 2014, the highest of any Chevy nameplate. The number one trade-in for the Volt is the Toyota Prius. To date more than 75,000 first generation Volt owners have driven hundreds of millions of EV kilometres.

The new Volt will offer a GM estimated 80 kilometres of all-electric driving range on a single charge, a 31-percent improvement over the first-generation Volt. This means that new Volt owners should anticipate that approximately 90 percent of trips in a new Volt will be driven all-electrically.

Additionally, the 33 litre fuel tank and an estimated combined fuel consumption rating of 5.7 L/100km ensure that the Volt can travel farther on gasoline when needed. The current-generation Chevrolet Volt has been Canada’s best-selling plug-in vehicle for 4 consecutive years, based on CVMA and IHS Sales registrations.