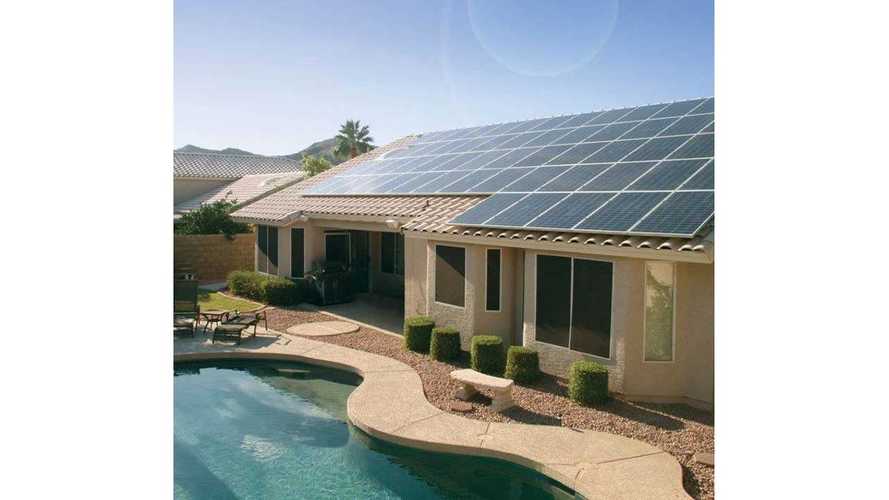 A 580 kilowatt solar array was recently added to the roof of Baltimore Operation’s e-Motor building, where electric motors and drive units for the Chevrolet Spark EV are built. This new array is made up of approximately 2,420 panels and covers 87 percent of the e-Motor building’s roof.

The "solar cliff" looks to have just been avoided.

The 30% federal credit for solar energy was set to expire in 2017, to be replaced with a 10% credit for businesses and eliminated entirely for residential solar consumers; basically signalling a huge roadblock for widespread PV adoption in about~13 months time.

However, late last night House Republicans took the wraps off of new legislation which had provisions for five year extensions of tax credits for solar and wind.

UPDATE:  As expected, the extension of the solar and wind credits has passed.

Shortly after the house approved the bills Senator Dianne Feinstein urged her fellow Senators to also vote in favor of the package, “May the force be with you,” in a cute homage to the latest Star Wars release today; apparently that was all the convincing needed.

And if that action seemed a bit odd for the Republications...or at least a bit out of character, well, there are trade-offs.  The cost was the end of protracted negotiations with the Democrats over the ban on exports of U.S. crude oil.

The extension of the Investment Tax Credit (ITC) for solar and the Production Tax Credit (PTC) for wind is widely expected to now be approved shortly (Thursday or Friday) as Democratic leaders said yesterday they would support new Republican proposals, provided those renewable energy credit extensions were attached.

House Minor­ity Lead­er Nancy Pelosi had worried that she had not secured enough votes to pass the bill, while stating in a letter to lawmakers that it was a good deal in the long run.

“Furthermore, while lifting the oil export ban remains atrocious policy, the wind and solar tax credits in the Omnibus will eliminate around ten times more carbon pollution than the exports of oil will add.

For myself, after long and serious study of the bill’s details, I concluded that while I detest lifting the oil export ban, I will not empower Big Oil to upend so many victories for hard-working American families.

As you pray and think over this decision, I hope you will join in making these critical achievements a reality for the American people."

Politics aside, it is a big win for renewable energy, and a even bigger win for the likes of Solar City, First Solar, and Sun Edison.

Nissan LEAF Featuring PV: Good For Upwards Of 10 Watts To The EV's 12V!

Given the close relationship between residential renewable energy and the ownership of plug-in vehicles, this is a big win for both industries.

Speaker Paul Ryan said he fully expects this motion to get passed:

"I am not going to predict how the vote count will go down...in negotiations like this; you win some, you lose some. Democrats won some, they lost some, we won some, we lost some. At the end of the day, we are going to get this done."