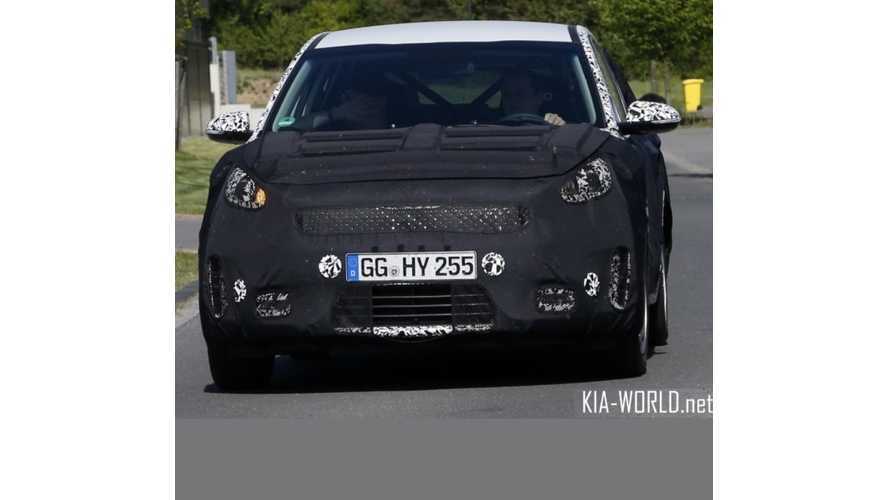 An all-new Kia prototype crossover vehicle has been spotted close to the company's German research and development center.

Speculation on what and how this vehicle will fit into Kia's future lineup abounds.

What we can tell you from the spyshots for sure is that it isn't a replacement for any current vehicle for the brand, and it isn't the company's new KX-3 vehicle - this vehicle is larger.  Unfortunately, that is where our own knowledge ends of this product.

Thankfully, while talking to our friends at Kia-World, they let us in on some unofficial knowledge on the product.  And that it is going to have a plug-in option!

Speculated to arrive in 2016, this Kia is a compact crossover that looks to take on hybrid vehicles such as in the Toyota Prius family, and also some market share in the inexpensive plug-in utility section; which as of right now needs as many participants as possible.

Kia-World notes the unofficial details on the CUV as follows:

- Hybrid car platform - "The platform that the vehicle will be built on will be a stand-alone hybrid platform that will not be used by any other vehicle in the Kia lineup. That said, Hyundai, the parent company of Kia, are expected to use the platform for a similar type of hybrid vehicle to be released at about the same date"

- Electric powertrain technology - "There will be a pair of different options eventually made available. The vehicle will start as a hybrid electric model, with a plug-in hybrid model expected to be introduced at a later date. Regenerative braking and ISG start / stop system will be included in the mix! There are no engine or electric motor specs available at this stage of the development."

- Sizing: "As far as size and dimensions go, the new vehicle will fill the gap between the Soul and the Sportage CUV, which means a length in the region of 4350mm."

Although Kia/Hyundai has been late arriving in the plug-in game, we have to commend the company on at least attempting to produce plug-in vehicles that a larger demographic of the population actually want, as opposed to producing another sub 100 mile city car.

Our thanks to Mike at Kia-World, check out their full story and recap of this vehicle here.
++