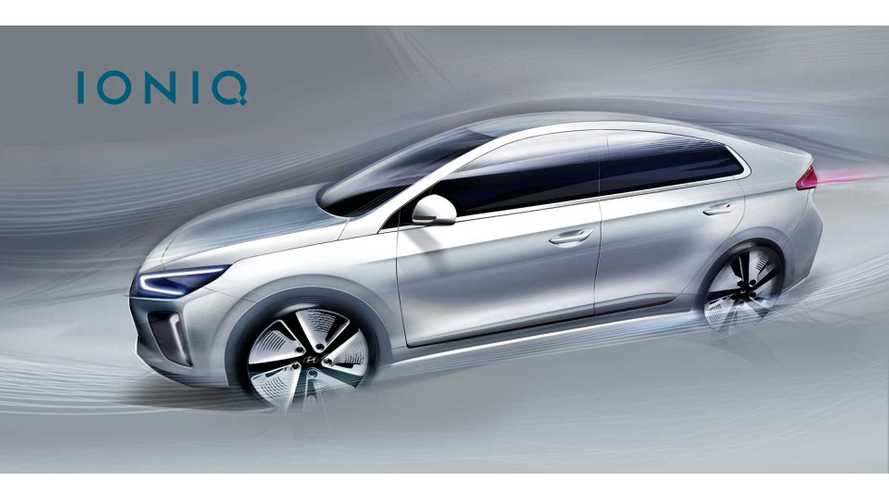 The Hyundai IONIQ, announced one week ago, was revealed in two more teasers - one for exterior and one for interior.

Unveiling is scheduled for January in Korea and later in Europe (Geneva) and U.S. (New York).

Hyundai IONIQ is to be the first model available in three versions - all-electric, plug-in hybrid and hybrid.

In the first image it looks like a normal car, without any flashy design. Hyundai states that "sleek and simple exterior reduces aerodynamic drag for greater efficiency".

"A new rendering of Hyundai Motor’s all-new IONIQ hints at how the innovative, alternative-fuel compact vehicle, which is due for launch in early 2016, will combine head-turning good looks with class-leading aerodynamic performance.

Hyundai Motor has confirmed that the IONIQ will be the world’s first car to offer a choice of three efficient and ultra-low-emission powertrains: full electric, plug-in gasoline / electric hybrid, or gasoline / electric hybrid. With a sleek, coupe-like silhouette and numerous eye-catching details, its confident design is a match for its bold environmental credentials.

The IONIQ will deliver a fun and responsive driving experience, while also meeting the needs of those wishing to reduce the impact their motoring has on the environment. Hyundai Motor’s designers have therefore created an exterior design that is rich in emotional appeal, as well as making a significant contribution to meeting the car’s environmentally-focused brief.

Simple, carefully wrought contours minimize wind resistance and assist the efficient management of airflow around the exterior. At the front, familiar Hyundai design themes are evident notably the signature hexagonal grille, which is also topped by an attractive gloss-black element that extends outwards to meet distinctive new headlamps featuring integrated ‘C’-position lights. The exterior color choice adds to the car’s allure, formulated to be evocative of fog about to lift.

Inside the IONIQ the smooth, elegant and clutter-free theme continues. There is efficient use of interior space and a clear, logical approach is applied to the layout of control functions. Simple and stylish surfaces make use of eco-friendly materials to convey a futuristic yet warm cabin ambience that will appeal to a new generation of motorists.

Even before the arrival of the IONIQ, Hyundai Motor is already one of the world’s leading manufacturers of hybrid and low- or zero-emission vehicles. In 2013, the company became the first car manufacturer to mass-produce a hydrogen-fueled vehicle, the Tucson Fuel Cell (ix35 Fuel Cell in some markets).

The IONIQ’s name references elements of its creation. An ion is an electrically-charged atom, linking to the car’s clever combination of electrified powertrains. The second part of the name references the uniqueoffering it brings to the Hyundai range, demonstrating the brand’s environmental commitment and willingness to maximize choice for its customers. Finally, the Q is depicted in the car’s logo as a visual breakthrough, acknowledging the fresh new approach of this advanced, low-emission model."

If the new teasers aren't enough for you, maybe it's worth checking out the 2012 concept. It was a plug-in hybrid back then:

"The i-oniq concept has an innovative powertrain that demonstrates Hyundai’s commitment to clean technology.  A 1.0-litre, 3-cylinder petrol engine is mated, via a generator, to a lithium ion electric motor which produces 109 ps.  In electric-only mode, i-oniq has a range of 120 km, while with assistance from the petrol engine it can travel up to 700 km, producing just 45 g/km of CO2 in the process."

We found a bunch of videos related to the Hyundai IONIQ. First is spy video from Spain:

Another video presents the all-electric drivetrain with LG Chem batteries: