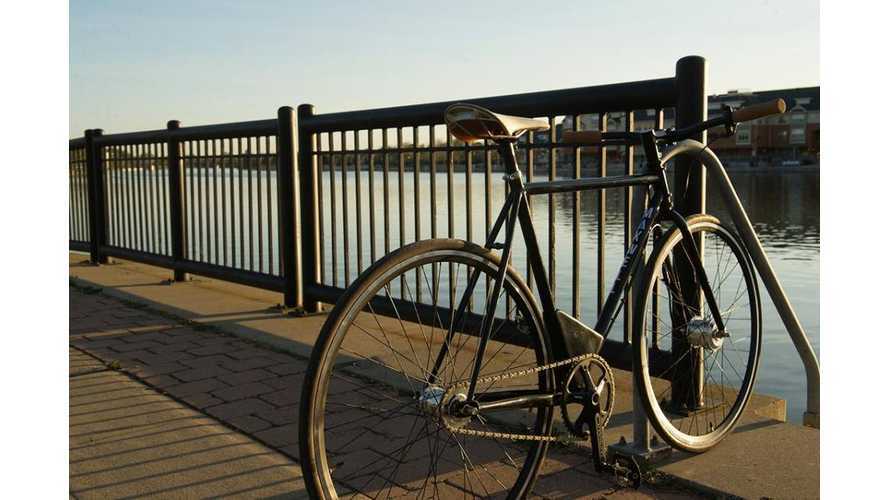 Maxwell Motorbikes is now a thing.  Remember The Adventures of Troy Rank?  Well, Rank and team have been hard at work putting together a product that's just about as different from his extended-cargo-carrying-multi-state-record-setting-prototype-"ADV-1" as any bicycle could be.  You're probably looking at the photo above thinking, where's the battery?  Where's the motor?  How come it looks like a fixy-light bike instead of a heavy e-bike?

Exactly.  This is the Maxwell Motorbikes EP-0, an elegant, clean, light, electric bicycle that weighs in at 27lbs.  Let's start out with some lovely photos, by way of Patrick Stephano Photography, shall we?

The specs are pretty impressive.  With NMC batteries enclosed within the frame and a 300W hub motor in the front and a 2-speed coaster brake hub in the rear, Maxwell specs out like this:

We have lots of questions.  The first is, (after "Where are the batteries?") how do you get to the batteries?  See those 4 bolts on the headstock?

Brilliant. Pop those off and you have full access to the cylindrical cells living in the frame tubes.

The speed control is intended to be primarily pedal-input determined - that is, you pedal harder, you get more motor help along the lines of the BionX and Trek systems, among others, but at this point they'll set it up so it can be entirely under pedal control, or entirely with throttle control at the whim of the buyer.  With proportional assist able to be programmed at a control panel on the bars (not shown in these photos), the intent is to set the bike up without the extra hardware and cabling of a throttle, though Rank says he prefers to have the input of a throttle.  The test riders apparently came out evenly divided for, and against, 100% pedal control.

For you tech nerds, Maxwell is running a full field oriented vector controller, enclosed in that little v-shaped box at the bottom.  Originally for high-performance AC motors, it's a perfect application for a bike like this due to it's higher, smoother, less expensive and more efficient performance in a small package.

For now, the company is offering the one model, with variations planned for the future with component packages.  Also in the plans are some programmable features Rank doesn't want to talk about quite yet...  let's just say, allowing the bike to tailor it's power to the riders needs.  How's that?

Rank emphasizes the classic style, clean design and versatility of the bike:

The EP-0 is a great bike even when you don't turn it on.  It's a lightweight, classic track bike for the city, enough range to get anywhere quickly and charge quickly.

The EP-0 could be a touring bike too, it could still extend the touring distance 40 miles in day for the average touring cyclist.

The main Maxwell Motorbikes website is here, where you can read up and put your deposit down - expected delivery is to be announced, but it looks like early Fall (2015).  Also check out their Facebook page, here, where you'll see all of the awesome photos and updates with news and the like.  And where they say stuff like, "You're now magically 3x more powerful. Now go somewhere awesome! "