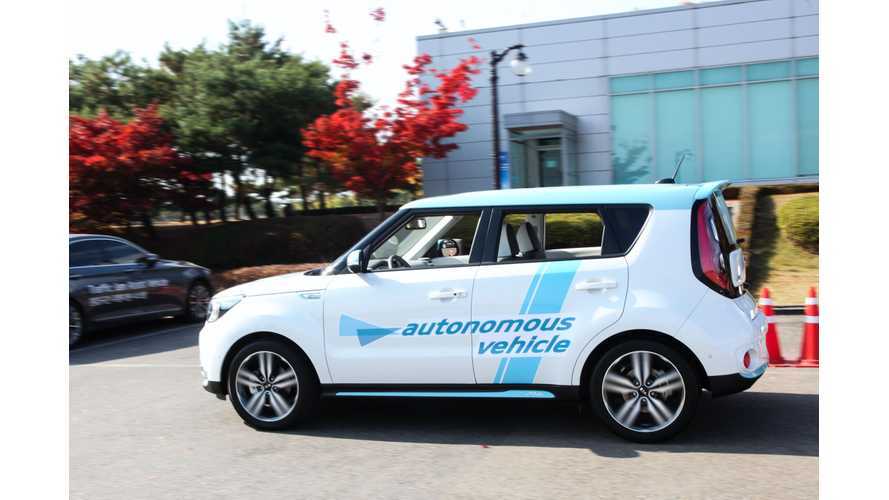 A lot is going on in Nevada these days.  Tesla, Faraday...now you can add Hyundai/Kia.

The all-electric Soul EV is used as the test bed for Advanced Driver Assistance Systems in Beatty, Nevada:

"Kia – together with sister company Hyundai – hopes to experiment with partially- and fully-autonomous driving technologies in real-world conditions, an important part of its roadmap for autonomous driving.

Kia plans to introduce a range of partially-autonomous driving technologies to its model line-up including eco-friendly vehicles by 2020, and is aiming to bring its first fully-autonomous car to market by 2030. The initial stage of investment by Kia and Hyundai – totalling US$2 billion by 2018 – will enable the companies to develop new Advanced Driver Assistance System (ADAS) technologies and employ a greater number of engineers. The investment will lead to the introduction of next-generation smart vehicles in the coming years."

“A great deal of research and rigorous product testing is being undertaken in order to make the ‘self-driving car’ a reality. Thanks to this license we will be able to accelerate the testing of our new autonomous driving technologies that are currently in the early stages of development, with particular emphasis on our alternative powertrain vehicles. We are confident that our latest innovations – both for partially- and fully-autonomous driving – will ultimately make driving safer for all road users.”

More about the research topic:

At all times, the new range of ADAS technologies can be circumvented by direct driver control, enabling closer control of the car as desired.

These new technologies will join the suite of features already offered by Kia on its latest production vehicles, including the Sorento and the soon-to-be-launched all-new Optima and Sportage. These technologies are primarily designed to make driving safer and easier for Kia customers by identifying hazards at the earliest possible opportunity and allowing the driver – or the car – to take the appropriate reaction. Existing Kia technologies include Lane Departure Warning System (LDWS), Lane Keeping Assist System (LKAS), Blind Spot Detection (BSD), Auto Emergency Braking (AEB) and Advanced Smart Cruise Control (ASCC).

Over the longer-term, Kia is targeting 2030 for the introduction of fully-autonomous vehicles. As a key part of Kia’s development of fully-autonomous driving technologies – the true ‘self-driving car’ – Kia is focusing R&D resources on vehicle-to-vehicle (V2V), vehicle-to-infrastructure (V2I) and vehicle-to-everything (V2X) communication.

By enabling cars to effectively communicate directly and independently with their surroundings, Kia will be able to make ADAS-equipped vehicles as safe and efficient as possible."