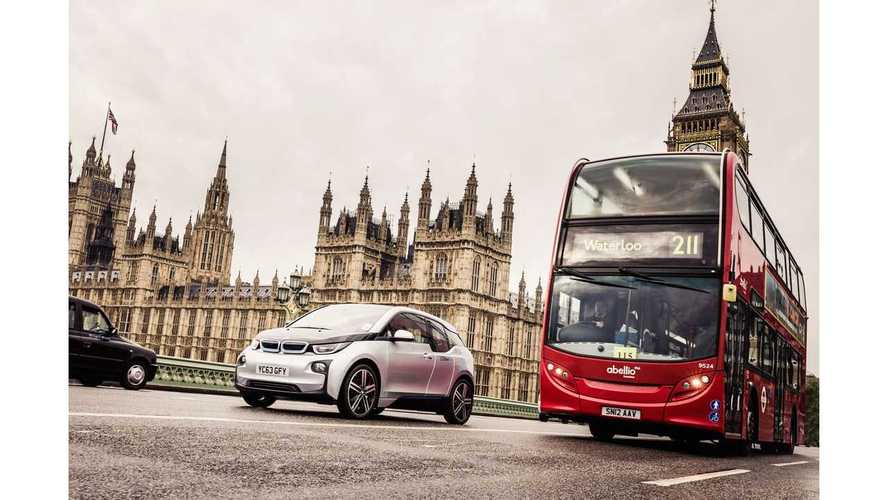 This is the first step in a broader campaign and this summer BMW i3s will be included in DriveNow's fleets in several cities in Germany and in other countries in Europe.

The premium carsharing service already gathered a lot of experience with electric cars, testing ActiveE in Munich and Berlin in Germany and in San Francisco.

According to BMW, carsharing supplements local public transport and some 38% of DriveNow customers have sold a personal vehicle as a result of using the carsharing scheme.

Together with introducing electric cars in DriveNow, BMW plans to install more charging points. In London, initially drivers will get access to approximately a dozen charging stations within the entire operative area.

"Advantages for DriveNow customers in inner cities: Londoners avoid the city congestion toll with the BMW i3.

Moreover, thanks to DriveNow and similar services, entirely new perspectives arise in the promotion of locally emission-free mobility in urban areas. For example, the use of the electrically powered BMW ActiveE in DriveNow fleets in Munich, Berlin and San Francisco has boosted interest in the experience of driving an all-electric vehicle enormously. As a result, since March 2013, it has been possible to introduce the option of electric mobility to around 3,000 DriveNow customers in Germany each month, making an overall total of 100,000 customers. With the inclusion of the BMW i3, eCarsharing at premium level becomes even more attractive, whilst at the same time conquering further markets.

Therefore, the BMW i3 proves to be an ideal innovator of eCarsharing, with which it will be possible to achieve a reduction not only in traffic congestion, but also in emissions within the urban area. In London, it is exempt from the inner city congestion toll charged for conventionally powered automobiles. So DriveNow customers also benefit financially when they drive a BMW i3 through the city centre. In other major cities in which similar access restrictions apply or are planned, eCarsharing is an ecologically and economically sensible alternative.

The prerequisite for the success of eCarsharing programmes is the cooperation between providers and local authorities. The most crucial issue in this respect is the availability of public charging stations as well as privileged parking spaces for electric vehicles and carsharing fleets. This is of vital importance for flexible carsharing in particular. DriveNow maintains a permanent dialogue with municipal governments. User data on the electric BMW ActiveE, which has been deployed in Munich and Berlin since 2013, provide important information for the development of a requirement-oriented charging infrastructure.

With the introduction of the BMW i3 in London, DriveNow users will initially have access to approximately a dozen charging stations within the entire operative area. In Berlin, DriveNow customers now already have more than 150 charging stations at their disposal for the BMW ActiveE. By the middle of 2016, a further 420 charging points will have been added, 20 of which are designed for DC quick-charging. A further 700 charging stations can be installed in succession if required. Currently, the Munich city council is adopting an initial decision in favour of supporting electric mobility, which also comprises the development of a public charging infrastructure. Moreover, the electrification of several streets in the city centre with the Light and Charge streetlamp produced by BMW i is planned for 2015.

In order to secure the success of electric mobility, BMW is pushing ahead, together with partners from politics, the energy sector and the automotive industry, with charging infrastructure projects throughout Europe and the USA. These include a joint initiative with Volkswagen and ChargePoint for around