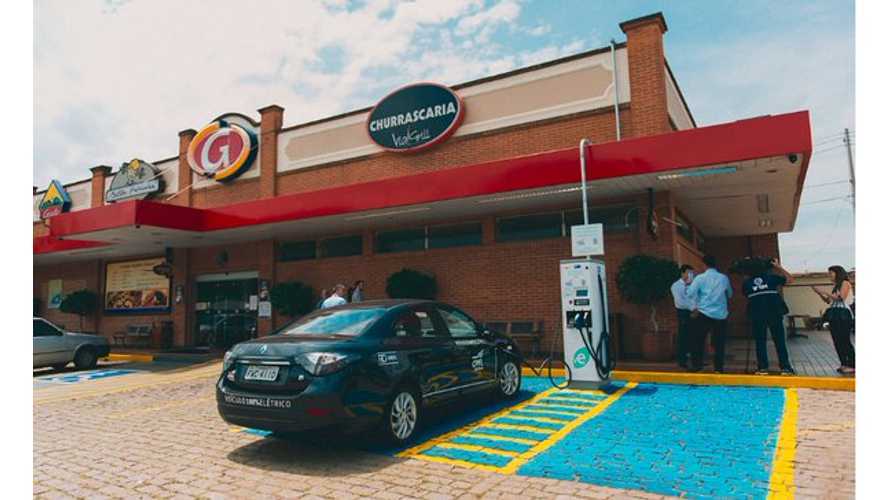 Throughout the world there has been an ailment caused by the lack of a united charging standard, but a temporary cure may be provided by the multi-standard charger.

ABB recently announced a three-head 50 kW Terra 53CJG installation in Brazil - "the first universal vehicle charger" in the country, which interestingly powers up a Renault Fluence Z.E in the promo shots.

Renault is strong in Brazil, so it's not too strange that from time to time they deliver some EVs there (such as the Kangoo Z.E. and Twizy), but none of those cars use DC fast charging - which is probably the reason for the Fluence ZE's appearance at the station.

For AC, there is the European Type 2 plug (which is different than Type 1, aka J1772). It seems that this Fluence Z.E. is Type 2 ready, in contrast to those sold in Europe with J1772 (if you're lost at this point, don't worry...that's normal, happens to everyone).

"ABB, the leading power and automation technology group supplied an universal fast electric vehicle charger to the Graal 67 service station, on Anhanguera highway - in Jundiaí (State of Sao Paulo). The charging station is a partnership among CPFL Energia, the Graal chain, and CCR AutoBAn - utility responsible for managing the Anhanguera-Bandeirantes road mesh - which is implementing the first intercity lane for electric vehicles in Brazil, between Campinas and Sao Paulo."

"The charging station is a partnership between several companies in order to provide a mobility project. ABB has extensive expertise in the development, installation and maintenance of charging electric vehicles infrastructure, and we had to contribute."