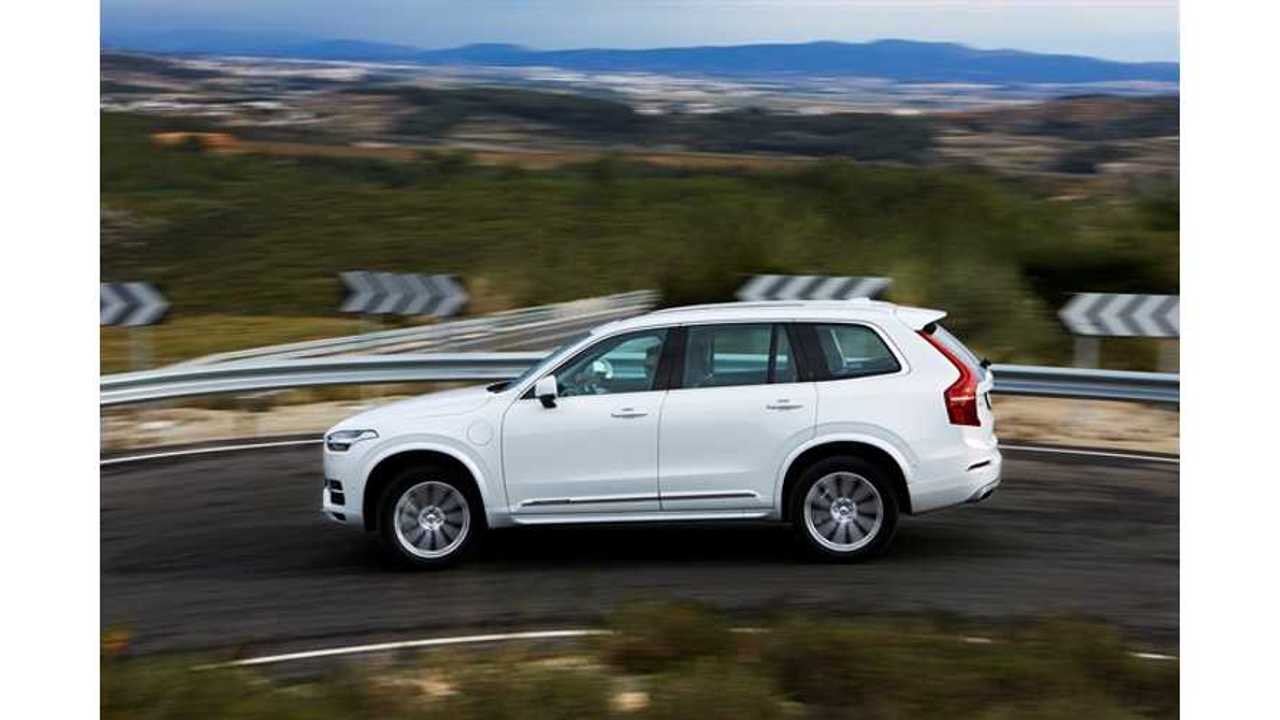 Volvo Cars already began in its Torslanda plant in Gothenburg, Sweden production of the new XC90 (on three-shifts), which attracted nearly 30,000 pre-orders.

Some 20% of them (probably around 6,000) are for the plug-in hybrid version T8 Twin Engine, although the company wasn't really ready for so many PHEVs. First deliveries of the T8 are expected in October.

XC90 is one of the most important new models in the Volvo lineup because of its new design language, new strategic Scalable Product Architecture (SPA) and of course the plug-in hybrid version XC90 T8 Twin Engine - a first from Volvo to go on sale worldwide. It also have seven seats (2+3+2).

Green Car Congress recently released a comprehensive recap, which helps to compare the latest plug-in Volvo to other models:

In the rear, Volvo used a 65 kW electric drive unit from Siemens.

"The Electric Rear Axle Drive (ERAD) (from Siemens) also has three functions: a generator for charging the battery; electric traction drive; and power boost. The water-cooled unit features a 10 gear ratio and has a disconnect clutch. The 65 kW (87 hp) unit delivers 240 N·m (177 lb-ft) of torque."

"Volvo had proposed an early version of the Crankshaft-Integrated Starter Generator (C-ISG) in 2001; that 42V system was intended for a mild hybrid application. The current C-ISG is integrated between the engine and the 8-speed transmission (itself the same unit used in the T6).

The water-cooled C-ISG has three functions: the starter; a generator to keep charging the battery; and power boost under certain conditions. Its contribution adds to the torque infill between gear shifts, enabling the smooth drive feeling; it also provides extra oomph during start-up and hard acceleration. The 34 kW unit (46 hp) delivers 150 N·m (103 lb-ft) of torque."

""The XC90 T8 has two extra cooling circuits. The first cools the C-ISG and the ERAD. The second cools the battery in one of two ways: either passively, via the radiator, or actively through integration with the car’s climate system."

Acceleration of T8 in the first three seconds exceeds base Tesla Model S 85 (we believe base rear-motor version).

"In the XC90 T8 PHEV—which uses essentially the same engine as in the T6 in combination with the 65 kW electric rear axle drive (ERAD), 34 kW Crankshaft-ISG (C-ISG), and 9.2 kWh Li-ion battery pack—acceleration improves by about 9% (0-62 mph in 5.6 seconds); system power is up by 25% to 400 hp; and system torque is up 60% to 472 lb-ft. Due to the sophisticated use of torque infill, the drive performance of the T8 PHEV is even more seamless and smoother than in the T6. (More on torque infill later.) All this in a quiet, extremely comfortable cabin that the Volvo team calls, with justification, “A Scandinavian Sanctuary”."

Just as a remember, XC90 test drives are anticipated to start at select US Volvo dealers in June, with first deliveries to customers happening in the Fall.

You can find a more detailed write up on the XC90 T8 PHEV  at Green Car Congress.