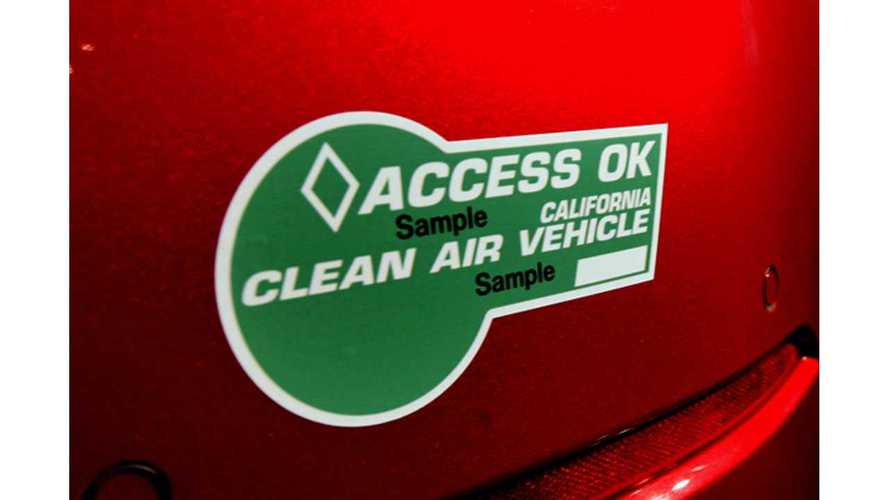 The California Air Resources Board, which sets the guidelines for the HOV decal program, reports that as of May 11 the California DMV had issued 68,992 green clean air vehicle decals. Consequently, only about 1,000 stickers remain before the total cap of 70,000 stickers is reached. While this is good to know, what does this mean to prospective buyers of plug-in hybrid vehicles? How long will it take before the decals run out again?

According to a similar update issued on April 8, the California DMV issued 63,255 green stickers as of then. This means that the recent run rate was between 160 and 170 stickers per calendar day, which would imply that the cap could be reached in about a week. Unfortunately, the DMV has traditionally had a significant application backlog, which could easily exceed the remaining allocation.

Assembly Bill 2013 (AB-2013) directed the Air Resources Board and the DMV to make additional 15,000 green decals available on January 1, 2015. Unfortunately, a fairly large backlog had built up between September 23 and January 1. The DMV could not issue any decals during this time, since the program cap has been reached and not yet extended. Although the backlog has shrunk significantly, it has never been fully eliminated.

Looking at it another way, the volume of plug-in hybrids sold in the State between September and April would suggest that all of the remaining green HOV stickers have been spoken for. This is further corroborated by a Facebook comment from Catherine Sylvester. This prospective BWM i3 REx buyer recently contacted the Field Office in Sacramento, and has learned that the application backlog stretches as far back as mid April.

This means that new applications will have little chance to be processed before the total cap of 70,000 stickers is reached, and future 2016 Chevy Volt and other new PHEV buyers are likely out of luck. Thankfully, there might be still a few vehicles with pre-assigned green HOV decals left on dealer lots. As improbable as it might sound, this strategy is more likely to succeed than submitting a new application to the DMV at this stage.

And finally, it's worth noting that the total cap will not be extended. This observation is based on the progression of AB-2013 through the California legislature last year. We are truly witnessing the swan song of this program. Those who wish to drive in the HOV lane might want to consider a pure electric vehicle or a used plug-in hybrid with green stickers on it.

Below you'll find various graphics assembled by us that show California's green HOV decal allotment, the state's number of stickers issued each month and a breakdown of model-by-model PHEV sales in California.