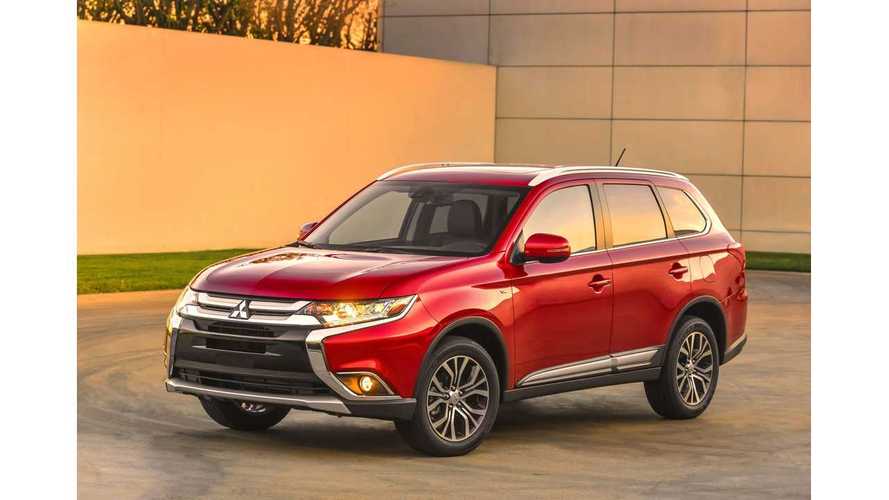 Here is the 2016 Mitsubishi Outlander unveiled at the New York Auto Show.

Production version with conventional drivetrain looks swell, which makes it a good base for the future PHEV version that will be available in US in approximately one year.

2016 Outlander has capacity for seven-passengera, but we are not sure whether this will remain or if the PHEV will again get only five seats.

"The 2016 Outlander has an eye-catching new design aesthetic inside and out, and with its long list of engineering upgrades, the new Outlander literally looks, drives and feels like an entirely new vehicle, making it an even  more compelling value than before. Mitsubishi's outstanding sales momentum is carrying into the new-year and with the arrival of the 2016 Outlander crossover we are well positioned to sustain our growth."

Here is more info on the 2016 Mitsubishi Outlander:

"The 2016 Outlander features Mitsubishi's new front design concept, "Dynamic Shield." This feature is inherited from the bumper side protection seen on generations of the Montero, providing unique protection for both the people and car.

Much more than a traditional mid-cycle design "refreshing" that consists of minor aesthetic updates, the new 2016 Mitsubishi Outlander has been redesigned and reengineered to stand out in the competitive small crossover segment with its powerful and dynamic appearance and refined driving experience. Combined with Mitsubishi's reliability and safety standards, the 2016 Outlander is an unmatched value.

The new 2016 Mitsubishi Outlander features a bold new exterior design, an eloquent yet functional interior space, and over 100 engineering and design improvements to the platform for better structural rigidity, ride quality and reduced noise, vibration and harshness (NVH).

The 2016 Mitsubishi Outlander comes equipped with the following standard features:

Appealing New-Look Exterior The 2016 Outlander features Mitsubishi's new front design concept, "Dynamic Shield." This feature is inherited from the bumper side protection seen on generations of the Montero, providing unique protection for both the people and car.

Fresh New Interior The 2016 receives a fresh design update to the interior incorporating soft touch features that also includes a redesigned steering wheel, a new Mitsubishi Multi Communication System(MMCS) navigation and display audio system and accent trim for the doors and dashboard, along with improved seating surfaces and headliner (all models) and an auto-dimming rearview mirror with Homelink® (GT model). Additional improvements include a newly redesigned folding rear seat for easier operation.

Comprehensive Safety/Warranty for Advanced Safety Technologies The 2016 Mitsubishi Outlander is available with advanced safety technologies including Forward Collision Mitigation (FCM), Lane Departure Warning (LDW) and Adaptive Cruise Control (ACC). The 2014 and 2015 Outlander are rated a "Top Safety Pick+" by the Insurance Institute for Highway Safety (IIHS) due to the optional Forward Collision Mitigation.