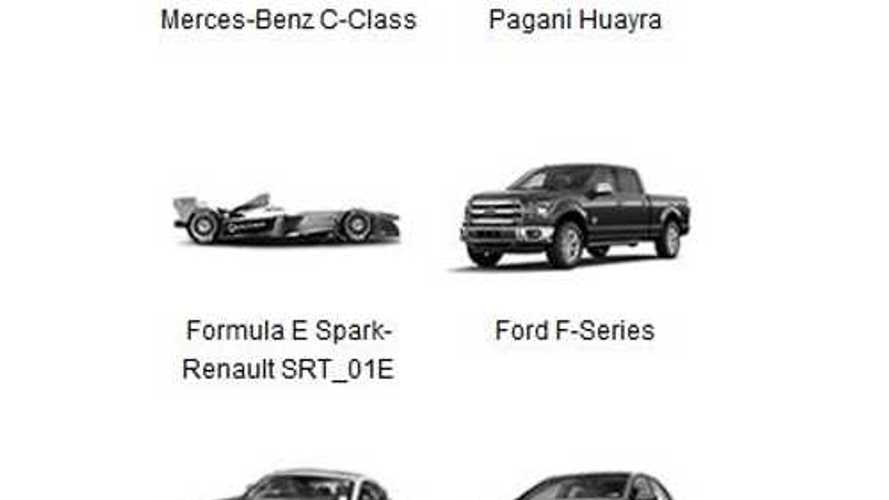 Here's a graphic showing the cars that made the Top Ten list:

We should note that while only two of the cars (BMW i8 and Formula E racer) on the list are available exclusively as plug ins, some of the others come with a plug-in setup as an option (Mercedes-Benz C-Class and Volkswagen Golf).  Let's not overlook the Toyota Mirai either.  Though not a plug-in, it is an electrically powered car.

Below you'll find a snippet (click the car's name for the full IEEE write-up) on why the BMW i8, Formula E racer, Toyota Mirai and Volkswagen Golf were chosen for this Top Ten list:

As a splashy billboard for a plug-in future, the BMW i8 is unmatched. Environmentalists who shake their fists at guzzling Lamborghinis fall in love. Speed freaks who scoffed at electrified sports cars change their tune in 4.4 seconds, the time it takes the i8 to howl to 100 kilometers per hour (62 miles per hour). Design mavens thrill to the BMW’s thermoplastic-clad, wind-cheating teardrop shape.

The i8 isn’t the first carbon-fiber-intensive car. But along with its cousin, the i3, the i8 is the clearest indication yet that the future belongs to cars made from material that’s ultrastrong yet weighs half as much as steel.

Governed by Formula One’s sanctioning body, the single-spec Formula E car is designed and built by a who’s who of racing heavyweights. McLaren Electronic Systems created the AC “motor-generator unit,” with a maximum 200 kilowatts (268 horsepower) and a roughly 3.0-second sprint from 0 to 100 kilometers per hour (62 miles per hour). A driver-operated “push to pass” feature delivers temporary bursts of an additional 67 kW (90 hp).

Is it a Mirai or a mirage? Skepticism is necessary with hydrogen-fuel-cell cars. Dazzled by the promise of tailpipes that emit only water vapor, a generous driving range, and fill-ups within minutes, people often overlook the downsides: hardly any places to refuel and very high costs for both fuel and vehicles. But like Jason in the Halloween movies, hydrogen is ba-aaack, with several automakers insisting that they’re this close to putting hydrogen cars in showrooms.

The Mirai is the latest trial balloon, coming to California in late 2015 in small volumes at US $58,325 (or about $45,000 after tax incentives). Fuel-cell cars are basically electric cars that replace the battery with a fuel stack that generates electricity via a one-way chemical reaction fueled by hydrogen; when the hydrogen runs out, you pump more in.

The Golf recently marked its 40th anniversary as an affordable overachiever. But the seventh-generation VW has outdone itself, winning worldwide accolades for design, performance, and technology.