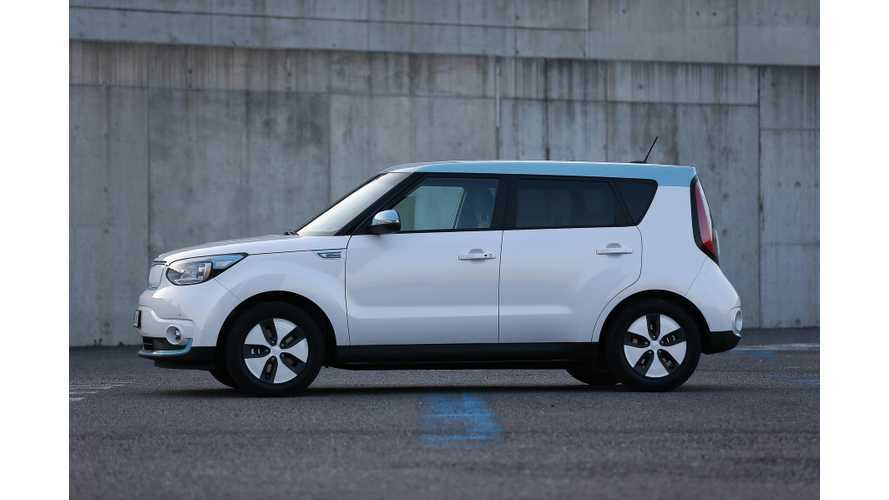 While still only available in some provinces in Canada - Ontario, Quebec and British Columbia (not unlike in the U.S. where sales are limited to California and soon 5 additional states), the Kia Soul EV has grabbed a coveted green car award: Canadian Green Car of the Year.

The award, issued by the Automobile Journalists Association of Canada (AJAC), was given to the Soul EV, one of four finalists.

The other finalists included, the Honda Fit, Subaru Legacy and Toyota Camry Hybrid.  From this list, it's obvious the Soul EV is the clear green winner.

The press release below describes the testing process in more detail.

What is a Green Vehicle?

It is a vehicle which, for its size and purpose, provides the Canadian consumer with environmentally-friendly returns that compare favourably with other vehicles in its class.

In an early afternoon press conference at the opening ceremonies of the Vancouver International Auto Show, the Kia Soul EV claimed top honours when the car was declared the 2015 Canadian Green Car of the Year by the Automobile Journalists Association of Canada (AJAC).

The Canadian Green Car of the Year award, in its preliminary season, was presented by Kevin Corrigan, Chair of the Canadian Green Car Committee at the Vancouver International Auto Show from a finalist list of four (4) vehicles. The top four (4) finalists, the Honda Fit, the Kia Soul EV, the Subaru Legacy and the Toyota Camry Hybrid, were announced at the opening ceremonies of the Canadian International Auto Show in Toronto back in February. The 4 finalists were "crowned' with green car toppers for the duration of the Toronto show – and will subsequently wear these same crowns in Vancouver – which showcase their place in the running for the Canadian Green Car of the Year Award.

"Kia Canada is thrilled that the all-new 2015 Kia Soul EV has been recognized by AJAC as the Canadian Green Car of the Year ", said Maria Soklis, Vice President and Chief Operating Officer, Kia Canada Inc. "This acknowledgement is testimony to Kia's ongoing commitment to deliver environmentally friendly automotive solutions and diverse powertrains to consumers without compromising on design or comfort."

7 vehicles became eligible for this top honour after being tested in the annual "TestFest" event that AJAC's Canadian Car of the Year Awards program hosts annually in October. These four (4) finalists represent the back to back, same day testing and vote results compiled by the largest group of Canada's best-known automotive journalists, who gather every year for a 5 day testing program, in late fall. KPMG, the accounting firm, tabulates all vote results and presents AJAC with the top 3 – or in this case, the top 4 due to a tie – in 15 different categories. Acura, Cadillac and Mercedes-Benz (smart), were also in the running.

Mr. Corrigan explains, "While an electrically-propelled sub-compact, thought of as green, may well suit those living within the city limits, is it not also true to view a fuel-efficient 6 cyl luxury hybrid product likewise, when compared to a V8 gas-powered vehicle in its relative segment of the market? Yes, the Canadian consumer requires environmentally-friendly transportation which meets their needs, whether it be a small city runaround, or a fuel-efficient luxury product for their airport limousine business. So when it comes to vehicle transportation, any & every vehicle which offers both fuel-efficiency and addresses environmental concerns is worthy of our attention, and praise, where due".