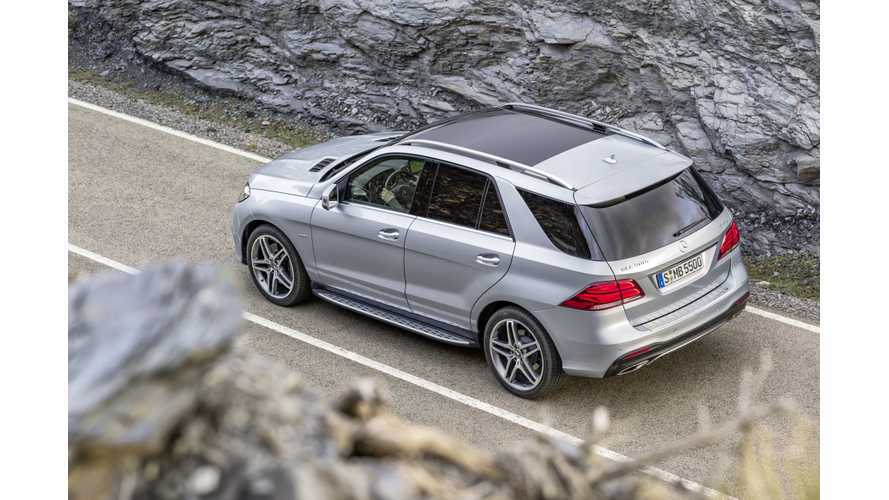 Mercedes-Benz recently announced plans for 10 new plug-in hybrid models by 2017 and it didn't wait long to unveil the next new model.

It's the Mercedes-Benz GLE 550 e (confusingly badged the 500 e in Europe), which will be available alongside conventional versions of the SUV this fall. World premier is expected just days from now at the New York International Auto Show.

Pricing is not available at this time.

GLE 550 e is equipped with V6 gas engine and a seven-speed automatic transmission, combined with an electric motor for total system power of 436 hp, 479 ft lbs of torque and of course it's AWD.

The relatively small battery pack of 8.8 kWh can be recharged in two hours, but electric range is stated at just 30 km (19 miles).

The new GLE550e 4MATIC with plug-in hybrid drive combines the power and refinement of a V8 engine with the fuel consumption of a three-liter car and the versatility of a premium SUV. The drive system components comprise a V6 direct-injection gasoline engine with 329 hp and a hybrid module with 114 hp of electric power. The system peak torque is a massive 479 lbs-ft. In addition to impressive acceleration thanks to the boost function, the innovative system drive also offers all-electric driving at speeds up to 81 mph, optimized energy recovery thanks to the intelligent operating strategy and comfort functions such as pre-entry climate control in summer and winter.

A selector switch on the center console and the instrument cluster offer the driver a choice between four specific operating modes:

The compact hybrid module is fully integrated into the seven-speed 7G-TRONIC PLUS automatic transmission. The electrical energy is stored in a lithium-ion battery with an energy content of 8.8 kWh, which can be recharged using public charging stations, the wallbox charger at home or on a conventional 220 volt power outlet. The charging time using the wallbox charger or the charging station is around two hours.

The best strategy for efficient driving has always been anticipatory driving without unnecessary braking and accelerating. This is even more important in a hybrid model: because braking manoeuvres serve not only to deliver deceleration, but are also used to recover kinetic energy. The route or the traffic also has influence on the most efficient charging and discharging of the high-voltage battery. For this reason the intelligent drive system management aids the driver with specific control strategies in adopting the most efficient driving style."