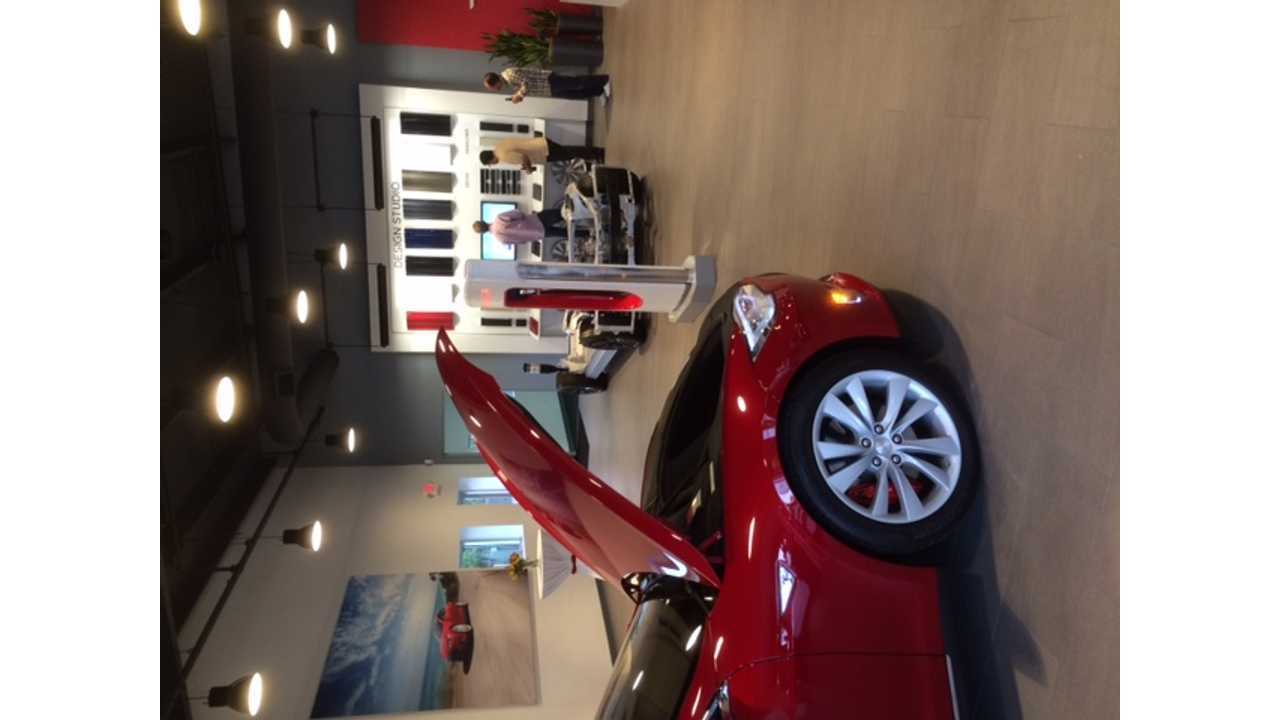 On March 7th, Tesla Motors hosted the grand opening of a new service center at 9140 E. Independence Blvd Charlotte NC. Being that the center is only 30 minutes from my home, and Model S Signature owner, Sam Dellinger extending an invitation, how could I decline. I was excited to see the center, along with the number of local Tesla owners gathered together for one evening.

There were early Model S 85 Signature adopters, 85 D’s, P85’s,  certified pre-owned, young, old, and from all professions. There was loads of enthusiasm and personal stories to be shared. Here are a few for our readers.

One of our first encounters was with Charlotte resident, Robert McRorie. Robert was very enthusiastic about his Model S. He had traveled to Raleigh NC to test drive a Tesla. He told of his excitement after ordering online as he relished in being the first in his neighborhood to own a Model S. That evening when he arrived home, he was stunned to see a new Model S exiting his neighbor’s drive! Robert pulled behind his neighbor to block him in and shouted “What have you done?!” They laughed heartedly and shared their excitement for the future. McRorie shared his tentative, yet satisfying experience with the supercharger located in Lumberton NC. This supercharger is strategically placed for both I95 traffic, and as a safety net for beach traffic out of Charlotte. McRorie used the supercharger on the way down to his beach home, but made the return without the need of the supercharger.

We met another delightful cardiologist named Steve Isserman. From the moment we met Steve, he never stopped smiling. As an early conversation opener, I asked Steve how he was enjoying his Model S. He paused and with great clarity exclaimed, “Regarding my Tesla Model S, it's the greatest relationship I've ever had, next to my wife.  I say the latter in case she's listening.”  It has been reported in many reviews that the Model S is not the best electric car, rather the best car period. Isserman, expanded his satisfaction beyond the automotive arena. Here we stood among several Model S in the showroom, and many more in the parking lot, yet Isserman insisted that we come look at “his" Model S. The thing I enjoyed the most was how unkempt the car was from use. Isserman has a family of five and uses the Model S for his extensive travel as a surgeon as well as family outings. Isserman opened the hatch to display his rear facing child seats. He did complain of the airflow in the back  and showed his own fan attachment. His excitement could not be contained. His enthusiasm was infectious.

We met with a young Chevy Volt owner whose lease was ending and who had purchased a pre-owned Model S 85. We met several young owners who were quite afraid to look too closely at the P85D in fear that it would end badly for their pocketbook.

I was also particularly interested in where Model S drivers stood on both renewable energy and the environment, and polled all that we spoke with on the issue. The general consensus has been that Tesla owners do not care about these issues. If the Charlotte crowd was any indicator, that opinion may be skewed. Not all EV drivers are passionate on these subjects, but it is this writer's opinion that the purchase of such a superior automobile is heightening the awareness.

By my rough estimate, 1-in-4 in attendance offset their energy usage with solar power. To my surprise, an additional 2-in-3 were considering the adoption of solar. I was further surprised at the overwhelming acceptance that fossil fuel was indeed bad for the environment. Was this the general stance of these owners, or was owning this superior EV changing their views on fossil fuels, and additionally for some, letting go of their defenses toward environmental issues?

The event appeared to be a success for Tesla Motors. For cardiologist Steve Isserman, a confessed dreamer and John Lennon fan, I think he left with the confirmation, that he was indeed, not the only one.