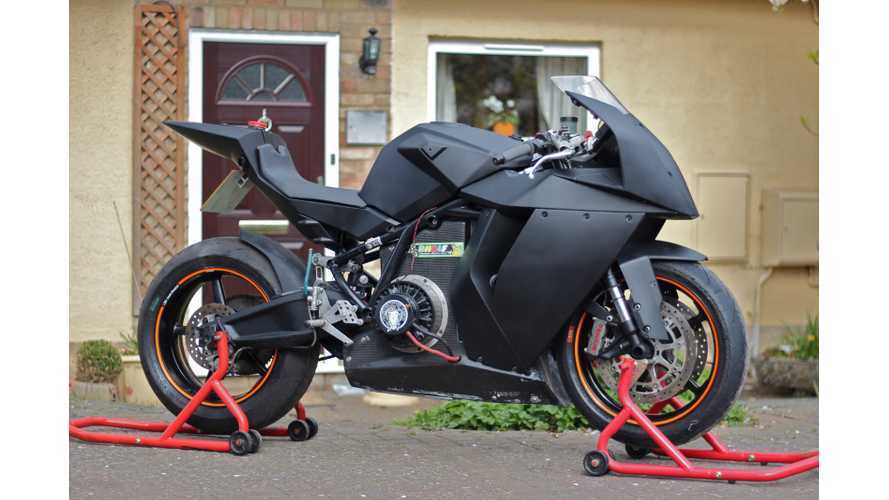 Ever wanted to own a piece of electric motorcycle racing history?  Here's your chance, for a mere £5,000.00 on the UK eBay site, listed as a "Classified Ad", and not an auction.  With twin Agni PMDC motors, it raised all sorts of attention back in '10, as you can read on a MotorcycleNews.com review, here.  Billed as the "world's first production superbike", it got a 4-star rating:

This is the world’s first production electric superbike. With two 96V Angi 95R motors housed in a KTM RC8 rolling chassis, this is an electric bike that not only really handles, it’s powerful and fast too. It’s brilliant around town and is fun on the open road. It takes around five hours to charge (and costs pennies) from a domestic power source and has a range of between 25 and 100-miles depending on how hard you ride it. Only the price and the range stop the Mavizen TTX scoring five out of five, but it shows that electric bikes could really be the future.

There were, apparently via the eBay ad, only 5 built (production?) but they had (and this has) impressive specs:

With some modifications to the air cooling, and addition of water cooling there is potential to achieve close to 100 bhp, and with updated Agni 111RDR motors (direct bolt on replacement) this could be more like 110 bhp

Current range 20-25 miles at full race speed, 25-35 miles on fast roads, or approx 50 miles in town traffic. Additional cells can be added to double the range - the battery box is currently only half full for weight savings during short circuit racing.

The bit that leaps out at us is the 7 kWh of Turnigy (RC) lipo.  Good lord.  Never being privvy to the battery specs back in '10, it's a surprise that the pack wasn't the secret sauce we imagined, and the same "RC lipo" that has spontaneously combusted more than a few race machines.  On a street bike?  Also, those motors.

The Agni, or, should we say, the dual Agni setup was the go-to motor of choice, run in tandem, for a 50+ kW race bike powerplant but there was one problem - not even the motor's creator, Cedric Lynch, could "match" them to the point that they weren't in constant danger of immolating themselves.  They eventually got the nickname, "twin Indian smoke machines" from the large number of on-track fires originating in the brush area, and were eventually abandoned for a single, larger PMAC or PMDC high-voltage, high-RPM drive.

Still.  The Agnis raged while they were running, and were responsible for more than a few podiums. Besides, it's historic. And it's pretty.  Happy bidding!

It seemed like we remembered a road test of the "street" version of this bike, and, lo and behold, we found it, via the LA Times: