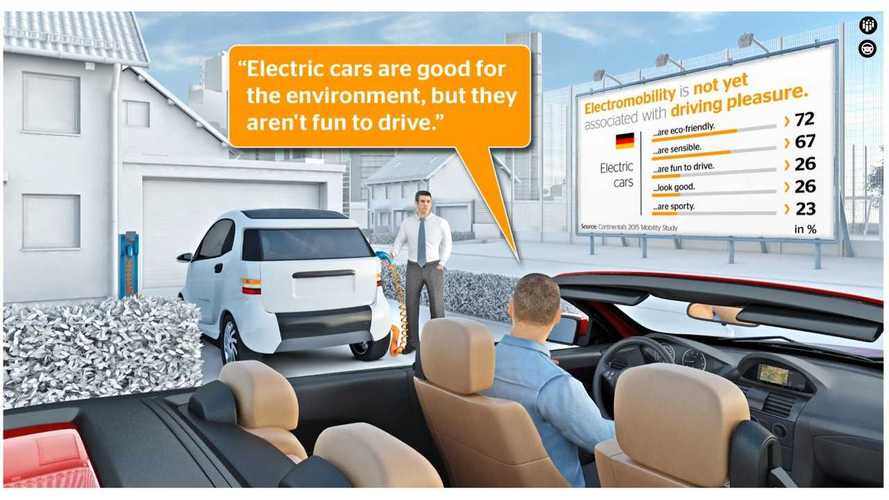 Continental suggests that findings from its 2015 Continental Mobility Study indicate that electric cars face image problems.  The entire study though is flawed because Continental allows responses from those who have no experience with electric cars:

"If you have no experience with these cars please rate the statements based on what you heard about it or expect from it."

Below you'll find slides (most of which are near impossible to make sense of) and a press release from Continental, but we stress that the study and its results are flawed.

Drivers mainly see electric cars as eco-friendly Only a few consider them sporty and fun to drive Many older drivers do not want an electric car, and younger drivers increasingly reject them

Electric cars have a special "green" image among drivers in Germany, but so far they barely evoke any emotions. In the 2015 Continental Mobility Study, a clear majority see fully electric-driven vehicles as environmentally friendly (72%) and sensible (67%), but the perception of image factors that play a key role in the purchase decision, such as driving pleasure (26%), attractive design (26%), and sportiness (23%), is low. In addition to the higher purchase price compared to conventional vehicles, the unbalanced image dampens drivers' expectations as to when they themselves will actually use such a vehicle.

For the 2015 Continental Mobility Study, the international automotive supplier Continental had the market and social research institute infas conduct a representative survey of motorists in Germany and the U.S.A., and a qualitative survey in France, Japan, and China. Experts from science and the automotive industry were also interviewed.

Compared to the 2011 Continental Mobility Study, significantly fewer drivers in all age groups expect to use a pure electric car in the medium term (four to ten years). The expectation figures fell from 47% to 34% among those 16 to 30 years old, and from 46% to 35% among those 31 to 59 years old. The reluctant attitude amongst drivers 60 and over – of all the groups, a population segment featuring an affinity for cars as well as high purchasing power – leveled off at 40%. At the same time, there was a strong increase (from zero to 20%) over the past three years in the number of young drivers who would switch to an electric car only if vehicles with internal combustion engines were no longer available.

"After several booming years, the pure electric car is currently facing image problems," says José Avila, Continental Executive Board member and head of the Powertrain division, commenting on the findings of the study. However, with hybridization – the combination of ultra-modern combustion engines with electric motors – he sees a way out. "Increasing hybridization, including 48-volt technology, will clear the way for electromobility. It allows a reasonable cost/benefit ratio and gives drivers their first experience with electromobility.

Avila is also confident that the image of e-vehicles' will improve. "Hybrid vehicles can create acceptance for electric cars. Drivers have the possibility to travel stretches of road in hybrid vehicles using only electric power and experience first hand how much fun they are to drive." Avila feels the study confirms that further consumption potential for combustion models can be developed while simultaneously moving forward with the strategy for the gradual electrification of the powertrain.