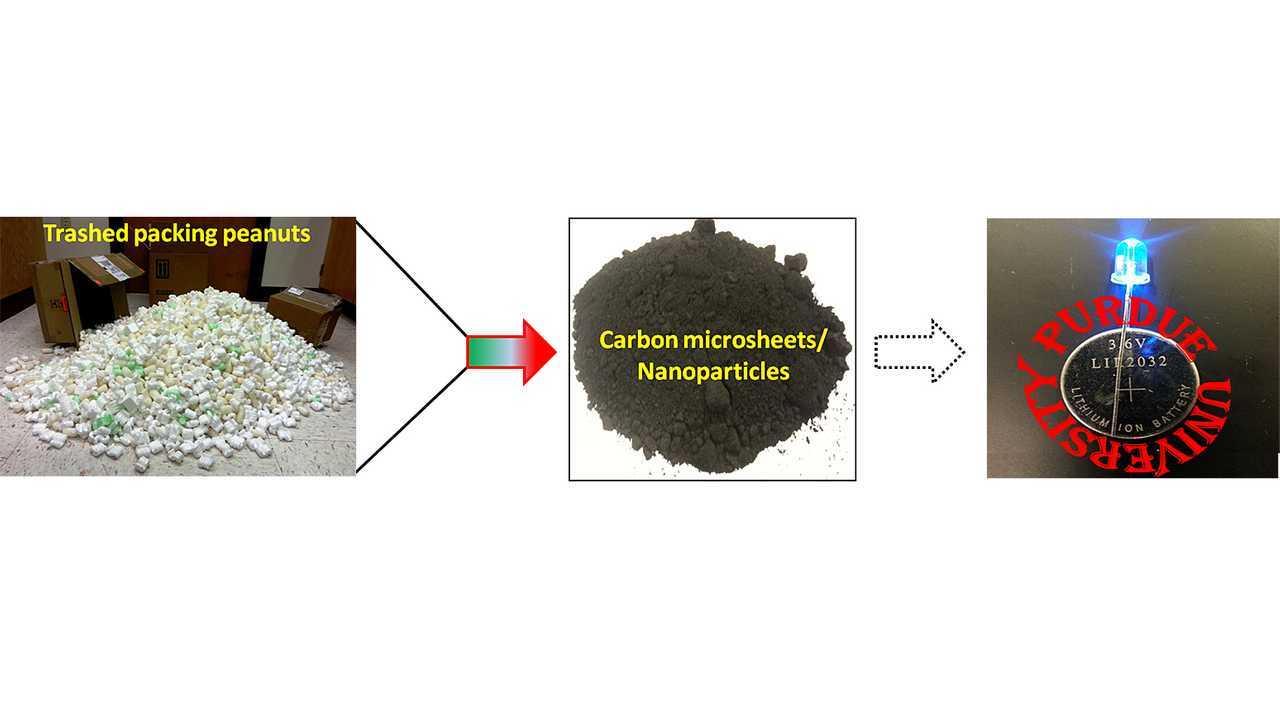 Purdue University researchers found a new second use of waste packing peanuts besides the ultimate fun box for cats.

"We were getting a lot of packing peanuts while setting up our new lab. Professor Vilas Pol suggested a pathway to do something useful with these peanuts."

The idea is to make from peanuts high-performance carbon anodes for lithium-ion batteries (and eventually sodium-ion batteries), which would outperform graphite. Carbon-nanoparticles are manufactured from polystyrene, while microsheet anodes are from packing peanuts.

"Typically, the peanuts are heated between 500 and 900 degrees Celsius in a furnace under inert atmosphere in the presence or absence of a transition metal salt catalyst."

The result is higher maximum specific capacity of 420 mAh/g for packing-peanut-derived carbon anodes (compared to 372 mAh/g in case of theoretical capacity of graphite). Anodes also can be faster charge and discharge. According to the article, the anode withstands 300 cycles without significant capacity loss, although we don't know at what current.

As the work is in the early stage, there is still room for improvements.

Second use of packing peanuts could be important from an environmental point of view, as recycling is expensive:

"Although packing peanuts are used worldwide as a perfect solution for shipping, they are notoriously difficult to break down, and only about 10 percent are recycled," Pol said. "Due to their low density, huge containers are required for transportation and shipment to a recycler, which is expensive and does not provide much profit on investment."

Consequently, packing peanuts often end up in landfills, where they remain intact for decades. Although the starch-based versions are more environmentally friendly than the polystyrene peanuts, they do contain chemicals and detergents that can contaminate soil and aquatic ecosystems, posing a threat to marine animals, he said."

"The process is inexpensive, environmentally benign and potentially practical for large-scale manufacturing," Etacheri said. "Microscopic and spectroscopic analyses proved the microstructures and morphologies responsible for superior electrochemical performances are preserved after many charge-discharge cycles."