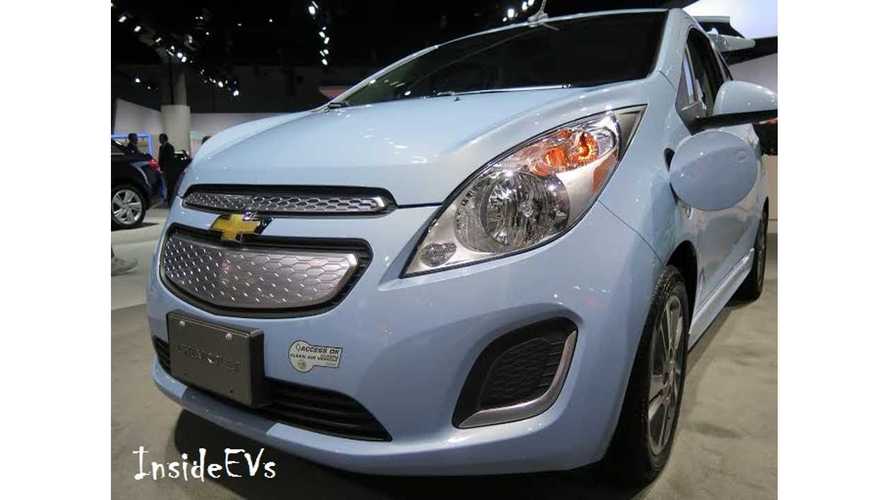 The name of the game for electric vehicle sales so far in 2015 has been diversity.

Never has that fact been more prevalent than in April, as the top 5 sellers for the United States in 2014 put up some fairly "meh" results during the month - off 36% (7,220 vs 5,297 a year ago), but the industry still went higher regardless.

No longer is the state of plug-in sales in America dependent on the success of just 2 or 3 models.  Seven different EVs have already proven the ability to sell more than 800 cars in 2015.

Most surprising this month was the Chevrolet Spark EV, whose new $1,600 lower MSRP and $139 lease deal was good for a 948% increase over last year, with an amazing 920 sales.  The old record for Spark EV sales? 182

Not to be out done, the Ford C-Max Energi, which had been floundering for years with its hybrid brother, came seemingly out of no where to post 1,237 sales - its best performance all-time, and the only plug-in not named LEAF or Model S to crack 4 digits this month.

UPDATE: Apparently the C-Max Energi stayed in “no where” for April, as Ford re-issued sales for the plug-in, saying: “Please note: This file properly bins April sales of the C-MAX Hybrid and C-MAX Energi.  These two vehicle were transposed in the last report.”  Instead of 1,237 C-Max Energis sold, the actual number was 553.

The Fiat 500e also stayed very strong in April, selling an estimated 717 EVs - the second best month for the car to date.

Of course, there was a couple surprising (and not so surprising) misses during the month.

With the current generation Chevrolet Volt ending production on May 15th, and the current generation Prius PHV ending in June, those two brands were off a combined 60% (1,333 vs 3,289) as consumers look ahead to future offerings.  On the other hand, with no decent excuse for poor sales, the BMW i3 was off 55% from last month (406 vs 922).

Some Other Point Of Interest From April:

Sales Of The BMW i3 Hit A Wall In April

Looking Ahead:  Diversity may be the basis of EV sales for far in 2015, but next to nothing will push the industry higher than it went a year ago.  In May of 2014, more than 12,300 EVs were sold thanks to Nissan selling a record 3,117 LEAFs and Toyota selling 2,692 Prius PHVs.  Neither will come close to matching those levels in May.

Looking Even Farther Ahead:  For 2015, all the sales are back end loaded with the launch of the 2016 Chevrolet Volt, Tesla Model X and a half dozen other niche plug-in EVs set to launch.

We expect year-over-year sales to be mostly flat through August of this year, but to be up 30%  almost indefinitely starting in late September.

The full monthly recap by individual plug-in can be found on our March Score card here.