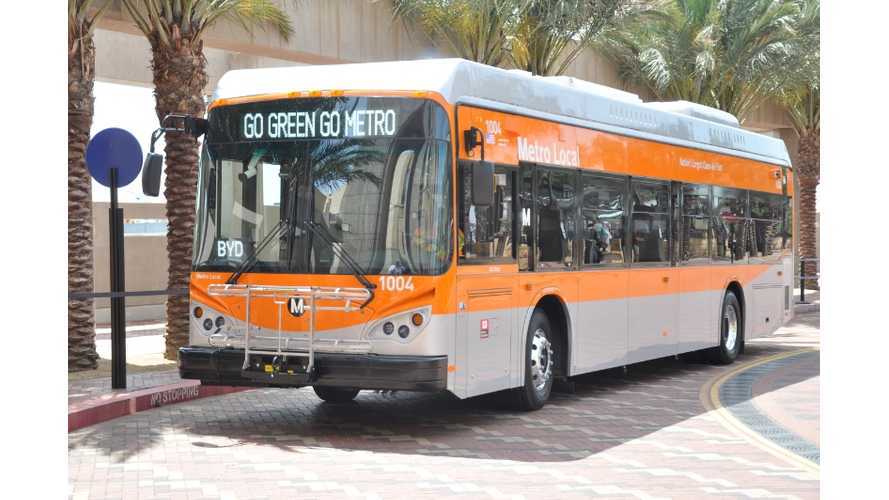 The bus has a range of more than 155 miles and soon will be integrated into daily operations.

LA Metro is ready to purchase 25 electric buses, which means that sucess of first five will trigger order for another 20.

"BYD's Battery Electric bus employs many advanced technologies developed in-house by a staff of more than 15,000 R&D engineers including the BYD Iron-Phosphate battery which boasts the only 12-year-battery warranty in the industry. Combined with BYD's proprietary in-wheel hub motors and regenerative braking system, the BYD battery electric bus offers the lowest life cycle cost of ownership. The BYD electric bus delivers a host of operational and environmental benefits for public transit riders, bus operators and residents of the community – it is very quiet and ensures a comfortable ride without vibrations, jerks or the noise associated with the conventional buses and combustion engines. The bus can also drive for more than 155 miles even in heavy city traffic on a single charge. As of April 1st, 2015, BYD bus fleets have completed greater than 50 million miles "in revenue service" and have been evaluated by more than 150 cities in 36 countries around the world. To date, BYD has built over 5,000 electric buses globally, making it by far the most popular electric transit vehicle on the planet."

"Today, BYD is creating jobs and providing an anchor for new businesses to locate in Los Angeles County and to provide jobs for our people,"

"I am so proud to see the electrified transportation movement alive and well here in Los Angeles. We know from widely available data, that buses and taxis emit nearly 30% of the world's harmful emissions, yet only account for 1.7% of total vehicle ownership! The fastest way for us to influence the most change, and help as many people as possible, is to replace our fossil fuel burning transit buses."